You are here: Home / Healthy Eating / 3 Reasons to Go Gluten-Free 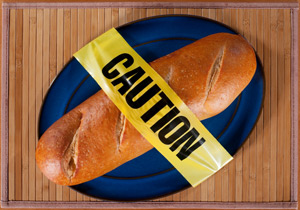 Many people today are starting realize that they have gluten intolerance and that their bodies do better without wheat and grain products that contain gluten.  Some have even be diagnosed with a disorder known as celiac disease, which involves an inability to digest gluten.  In addition, many people have adapted the “gluten free” diet and are using it’s principles to improve their weight loss plan.

Even though going gluten-free is not a “miracle diet,” it can actually help you a lot in your weight loss efforts. Here are some of the ways that going gluten free can help.

One thing that many people don’t realize is that, by going gluten free, you end up going low-carbohydrate as well. Why is this? Well, because the most common source of gluten is wheat, and wheat is at the core of many starchy or highly processed products, which make up the typical American diet. That means you will be eliminating breads, pastas, baked sweets, cereals, and a number of other foods that are processed with wheat.

Why does going low-carb help? A low-carb diet encourages your body to burn fat as you exercise, because it will want to store what little carbohydrates that you have for energy use later on. You need to have some carbohydrates, because they help with vital bodily functions, but reducing them can really help to jump-start your weight loss plan. You don’t want to totally eliminate carbohydrates, like some people do, but instead go low-carbohydrate and have some of an energy store to work with.

Of course, you have to do this intelligently; there are plenty of options out there for people who are gluten-free that have the same amount of carbohydrates (rice bread, for example), so it won’t really make much of a difference. Eat foods like veggies, fruits, nuts, seeds, and lean meats instead. Make sure that, however you go gluten-free, that the options that you are eating are not processed foods. They won’t help your weight loss efforts either.

By going gluten-free, you help to reduce inflammation in your body.

This is an interesting fact that many people don’t realize. Gluten itself (not carbohydrates, but the actual compound gluten) actually sets an immune response in some people, which may cause you to have issues with inflammation in different parts of the body, including your digestive system. As mentioned above, Celiac disease is one of the things that can happen as a result of this gluten inflammation, but there is a growing number of people in the population who are merely gluten sensitive, but are completely unaware of the sensitivity.

The inflammation usually occurs in the digestive system, as previously mentioned. This can cause a number of issues, including a lack of an ability to absorb nutrients and irritation of the bowels. It can also cause constipation in extreme cases. Even if you are not sensitive to gluten, eliminating gluten from your diet may help encourage this nutrient absorption, which will encourage overall weight loss. Overall, eliminating (or, at least, reducing) gluten from the diet could actually be a good thing, even if you are not sensitive to it at all. There is still research to be done on this topic, but there is speculation and information that you may want to research for yourself to find out if it may improve your health.

By going gluten-free, you may find that you have more energy. This is currently only speculation, based on some things that researchers have seen in studies. If you are eliminating gluten, which means that you are eliminating carbohydrates, why would it help you to have more energy? There are a few reasons that this may be the case. First, because you won’t feel “bloated” or “ill” due to the digestive system issues we just talked about. Another reason that this may be the case is because many foods that have gluten are processed and full of sugar, and it has been shown that the amount of processed food that you eat may affect how much energy you have overall.  If your blood sugar levels and not constantly in flux, you will have a more consistent energy level thus feeling less tired.

As with any diet and exercise program, make sure that you talk to your doctor before you go gluten free. They can give you suggestions on diet, exercise, and other factors that may be related to your weight loss goals, and he or she can help you in case something goes awry in the process.