You are here: Home / Before and After Photos / Aleisha lost 134 pounds

Weight Loss Story of the Day: Sonia sent in her sister’s transformation story.  Aleisha lost 134 pounds.  Sonia says that her sister is an inspiration to others.  Here is what she shared with us: 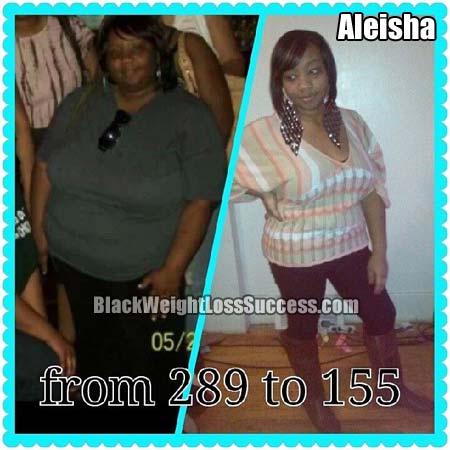 “This is my sister Aleisha Jordan-Alston. She had a lot of different health issues but decided to make a change when she was told that she would not be around to raise her 5 children if she didn’t lose weight. She not only lost weight but continues to motivate others to do the same. I hope you can feature her on your page. She deserves it. I’m so proud of my sister.

About 2 1/2 years ago her doctor told her very matter of factly that if she did not lose weight that she would be dead in 5 years and to prepare herself and her 5 children. She argued with him back and forth all the while being embarrassed, shocked and enraged. By the end of the appointment he was a little more compassionate about it.  He told her that if she worked hard, he believed that she could do it but he also honestly felt that if she didn’t make a change she would die in 5 years or less. She didn’t want her to children to grow up without her (all under 16 at the time).  She also wanted to prove to her doctor that she could do it.  This is what motivated her to lose weight. She was having a problem sticking to the traditional workouts so she started walking with me and some of our friends which made it seem more like something fun to do instead of working out. She also loves dancing and included that in her workout schedule. A different doctor put her on a strict changes to her diet which she followed religiously. She changed how often she ate (every 3 to 4 hours) to the portion sizes. She cut out fast food, stopped using a lot of salt and stopped eating fried foods. She also doubled her vegetables (which she hardly ate before losing weight), cut out beef and pork and started eating mostly chicken, turkey and fish. Of course she drinks water constantly. Her total weight loss is 134 pounds. She started at 289 pounds in March 2012 and she’s only 4’11”. Her current weight is 155 pounds. She does treat herself every now and then to her chips, cookies, etc but once she got used to not eating them she knew she could make it. She says she’s so happy that she made this lifestyle change and I’m a proud big sister.”