You are here: Home / Before and After Photos / Mikelle lost more than 100 pounds

Transformation of the Day: Mikelle lost more than 100 pounds. Her weight has been a constant struggle since childhood. She bared her soul and I really encourage everyone to read her powerful story. You’ll find some awesome wisdom and insights, especially if you are dealing with PCOS or insulin resistance. 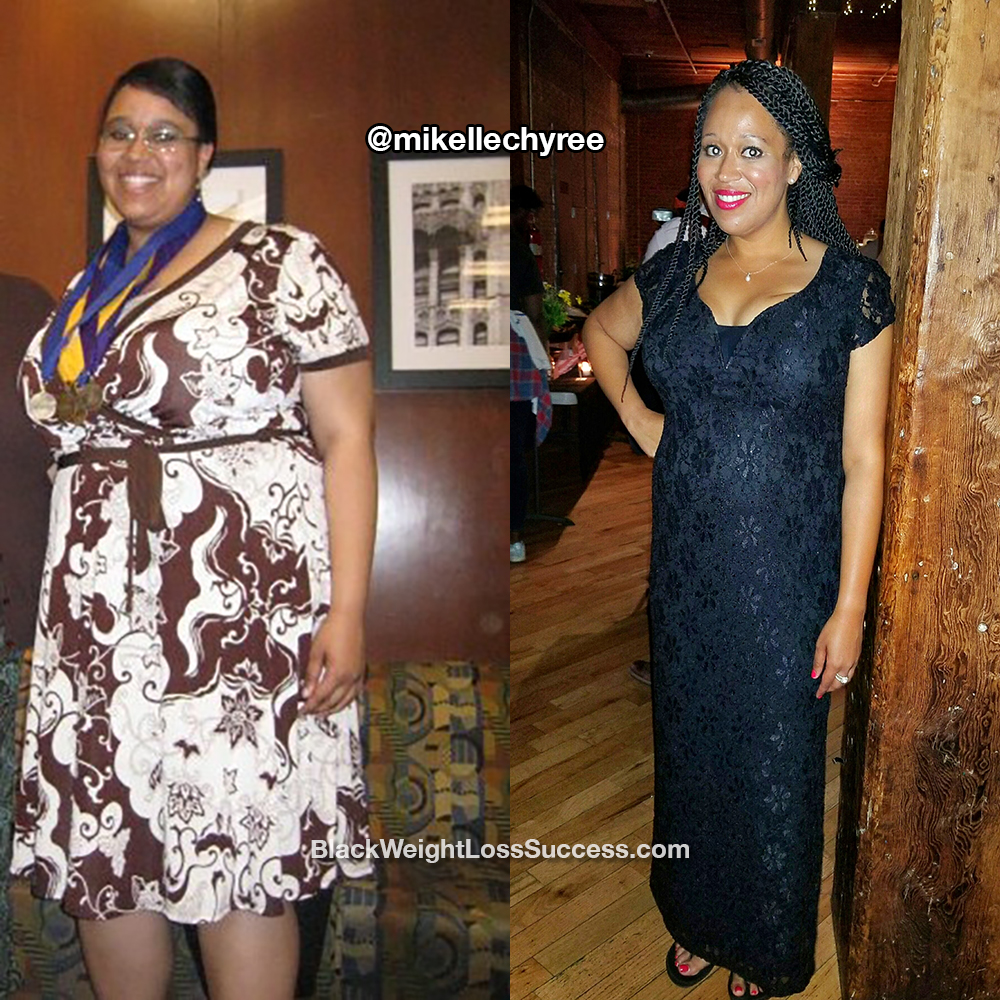 My mother bought me my first workout video when I was about 9 years old and I went on my first diet when I was about 16 years old. I had always been chubby, but in high school I reached well over 220 pounds. I spent the summer of my junior year in high school working out and dieting. This habit continued throughout high school, college and graduate school. My weight seemed to be a constant struggle. The highest weight I ever reached was approx. 300 pounds in 2007-2008. I am 5’8″.

With a family history of diabetes, irregular menstrual cycles, uterine cancer and other health issues, I tried very hard to be healthy. There were many years of diets and lifestyle changes (including Weight Watchers, Jenny Craig, Atkins, Paleo, Nutritionist Planning, being vegan, being sugar free, etc.). I also did research on different workout plans and tried to keep an active lifestyle.  Even with these various attempts, I would constantly lose weight and gain it back.

The various diets and work out plans I tried over the years would work for a short time, but the lowest weight I ever seemed to get to was around 227 pounds in 2012. My body always seemed to want to creep back up to settle at 250 lbs.

Throughout those various weight loss journeys, I would notice how irregular my menstrual cycle would become as I lost weight. Sometimes, when I would get close to 230 lbs, I would begin to bleed nonstop. Sometimes this would happen for months at a time.  OB/GYN’s would recommend birth control pills or tell me, “Well, if you lose weight your period will become more regular.” This was a frustrating and discouraging cycle. Can you imagine being vegan, sugar free, working out five days a week and being told that I just need to “adopt a healthier lifestyle.”?

At times, birth control appeared to help me lose weight, and at other times it would seem to make me gain weight. I’d try new meal plans, new workout plans and yet constantly plateau. Stressful seasons of life seemed to accentuate the weight gain. Often, I felt like my body was completely outside of my control. There were times when I pushed myself too hard. I would restrict calories, eat perfectly, workout 7 days a week (sometimes for 2 hours at a time) and then gain 4 pounds.

Between 2008-2016, I weighed between 230-260 lbs. Honestly I’ve lost count of how many times I’ve lost and gained the same 30 lbs. Over the years, I’ve done Zumba, kickboxing, weight training, and most recently I have started running.

In 2013, I started visiting Integrated Health Practitioners, and learned that I had insulin resistance and significant vitamin and mineral deficiencies (and this was with a plant based lifestyle!). I searched for new gynecologists, but it was very hard to find someone who would talk to me about the connections between my irregular periods and the weight gain. I was not officially diagnosed with PCOS until summer 2015. Some of the hormonal medications used to control the irregular bleeding made me gain weight that seemed impossible to get off.

Finally, in early 2017, I found a new gynecologist who clearly explained the correlation between the PCOS and weight gain. Under his guidance I was put on birth control and the highest dosage of Metphormin, a medication used to treat diabetes. Though I am not diabetic, these two medications have turned out to be critical for me. With my new doctor’s support, I also began the Center for Medical Weight Loss‘s shake program through his office.

In December 2016, I weighed in at 247lbs. Over the last 6 months, I have lost 50 pounds. This has been the first time on my journey that I broke the 227 pounds barrier. I currently weight 197 pounds, which means I have lost over 100 pounds since reaching my highest weight. The highest dress size I wore was a size 22/24 and I currently wear a size 12.

I do not know where this journey will take me next. I’d be lying if I said “I’ll never be that heavy again” because I simply don’t know if I will continue to lose weight or maintain where I am now. I do not know if I will gain all of the weight back. I don’t say this facetiously, but very seriously because I know what it’s like to go through seasons of life where you work really hard and your body seems to work against you. I decided to submit my story, because I’d like other people to learn from the wisdom I’ve been gathering over the years….

– Being overweight is not always about unhealthy eating/lifestyles – There have been times when I have weighed 250 lbs but was completely vegan, eating all vegetables and not eating any sugar or processed foods while working out 4-5 times a week. I did not understand that I had an insulin
resistance issue that impacted my menstrual cycle and vice versa. My new doctor told me that I should have been diagnosed with PCOS when I was 16 years old. That information could have saved me a decade of stress and anxiety related to my body.

– Discouragement is a soul killer. – There have been times when I chose to stop reading BWLW success stories because it seemed so unfair that other women could lose twice as much weight as I had in half the time. If you feel like you are working hard and not seeing any results, discouragement can cause you to stop and start all over again.

All of the messages we hear we from the media and (and sometimes from our doctors) tell us that we’re not really trying to eat healthily or we’re not really working out. There were many times when I cried myself to sleep because I didn’t think I was working hard enough and I could not understand what I was doing wrong.  So many people would say, “Why don’t you just…” and then list things that I had been doing for months or years.

– I cannot eat the way other people can. – I can only eat what my body can. Some people can eat sugar and carbs and maintain a healthy weight. Some people can be completely vegan and maintain a healthy weight. Their journeys are not my own. Multiple doctors have told me that I cannot be completely vegan because of my insulin resistance. I have had to identify what foods make me feel the best and help me reach all of my nutritional goals. For me, this means being mostly plant based, while eating concentrated proteins at regular intervals.

– Find a doctor who listens to you. – Overweight women often face significant discrimination from medical professionals.  I would cry in doctors offices trying to explain my journey and all the weight I had gained and lost over the years, only to be dismissed with “Well, you should think about adding weights to your cardio.” Advocating for yourself is hard, but it’s critical to find the right doctors who can run the right tests and help you identify what your body needs to reach the goals you have for yourself.

– Love yourself. – I hope this phrase hasn’t become played out. So many statistics show that girls begin to worry about being fat or not pretty when they’re in elementary school. This is particularly true for young black girls. We don’t often see ourselves represented in the media. The standards of “beauty” are impossible to meet. I’ve lost count of how many times I’ve been told, “You’d be so pretty if you lost weight” or “You’re pretty for a big girl.” I’ve lost count of how many times a guy that I cared about chose a thinner woman instead of me.

These moments are hard and painful, but I’ve learned that I cannot base my self esteem on other’s perceptions or behaviors. This sounds easy, but is a daily struggle, especially lately when people say “You look so good now!” or they associate being thinner with confidence. I’ve heard many folks say “You seem so much more confident now.”

Well, in reality, when I weighed 300 pounds there were a lot of things I was confident about! I was traveling internationally, I finished my master’s degree, and I had wonderful friends and family. I was loving life. Struggling with my health or my weight is just one part of who I am as a person, it’s not everything. I may not know what the future of my body holds, but I do know that this “Love yourself” thing is something I hope to never lose.