You are here: Home / Before and After Photos / Starlet has lost 67 pounds!

Today’s Featured Weight Loss Success Story Comes from Starlet who has lost 67 pounds going from 263 to 196. 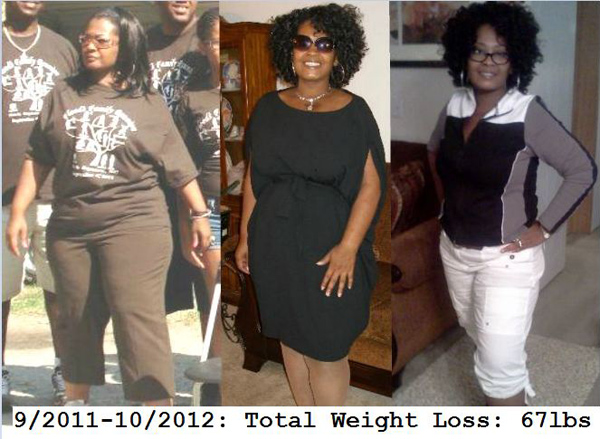 She says, “I took the picture in the brown Sept.2011, the pic in the black dress was around Feb 2012 and the far right photo was taken about 8 days ago. I started walking back in 2010 (3 miles a day) but that didn’t do much for weight loss it really just gave me energy and though I was still heavy I could walk through the mall or take a flight of stairs without giving out of breath. So in May 2011, I just started removing bread and starch like potatoes and rice from my diet…and after about 3 or 4 months I could start to see some changes..believe it or not that picture in the brown is not my heaviest weight.  I weighed in at 272 in 2010 but I can’t find any pic’s of me and I definitely know why (too ashamed) in Nov 2011, I began juicing and protein shaking and in March 2012, I had lost about 30 lbs.  This is when I saw significant changes in my health and my physical appearance…so I just started putting a little more effort to losing the weight after that by protein shakes in the morning and light lunches and dinners that do not contain bread, potatoes or rice..that’s it.  I walk daily in my neighborhood and just recently got a gym membership.  Sept 11′:263lbs and Oct 12′:196lbs.  I would like to say thanks for what you do because it is so important to let people know that you can do this…if you put your mind to it.  I have struggled with my weight for over half of my life.  I have been smaller before (160 lbs about 15 years ago) but being a big girl is pretty much all I know.  It’s a constant struggle to maintain low weight especially on a naturally voluptuous women but my pictures are constant reminders that I got to commit to whatever I need to in order to keep myself alive. Thanks”

Thank you so much for sharing your story with us, Starlet!