You are here: Home / Before and After Photos / Angela lost 61 pounds

Weight Loss Story of the Day: Angela lost 61 pounds. After a day filled with wakeup calls, this mom of 4 started her weight loss journey with the support of her husband who also wanted to lose weight.  Here is what she shared with us about her journey… 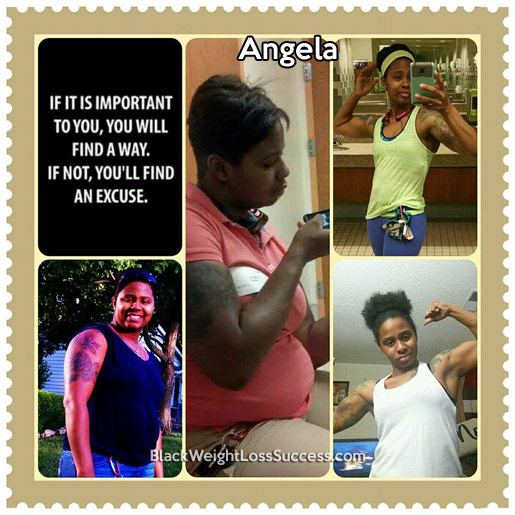 I’m a 28 year old mother of 4 and I’ve been married for 7 years. Back in 2012, my husband and I were trying to lose weight and we tried walking, running and eating smaller portions but never stuck to it. Finally in March of 2013, we went to Texas on family vacation and after seeing the photos we were disgusted with what we saw. We were like “Damn, we are fat.”, but that only stuck with us for a few minutes and then back to the norm.

Upon our arrival back home, we went the mall to get clothes and didn’t find any we liked (not the first time). As we were leaving, we stopped at the national guard to see what the qualifications for enlistment were. We were greeted by SSTG. E.Morgan. He told us about the military and what needed to happen before we could go any further. He told us to lose weight before taking the tests because if you do well and have to lose weight after the test it’s likely you’ll lose interest in joining. Then he weighed my husband he was 340 pounds! Yikes. With him being 6’4″ he should only be 225 pounds by their standards. Next it was my turn and I weighed 205 pounds! I said to myself, “Maybe the guard isn’t for me.”. E.Morgan he said that the guard is for EVERYONE who wants to do something for their country. He told us it’s for everyone who has the desire to succeed…its for YOU!!  To be eligible, we needed to lose weight. That’s when we said, “How can we? We tried a-z this and that. Nothing is working.” He told us that two is greater than one and gave us a diet plan. My husband needed to lose 100 lbs and I had to lose 50lbs.

We left the mall, got home around 7:30 pm and watched the show “My 600lb Life”. OMG, another eye opener for the day. At that point, I said “Hell no, that’s not going to be us.” We watched like 6 episodes of the show that night. Later on that night, I dreamed of my aunt who passed away from heart disease. In the dream she said I’m proud of you and I know you can do it. When I awoke, I looked myself in the mirror and said I CAN do this. I knew that I had to get rid of this fat and get healthy, even though I didn’t have any health problems at the time. I did have a family history and didn’t want to become another statistic.

I purged all the unhealthy food from our home.  Then I went to Walmart and bought $300 worth of food…veggies, lean meat, water, fruit and teas. Organic and gluten free, you name it I bought it. I started walking every morning after my kids got off to school. First it was half a mile, then 3 miles and then 5 miles. We got bikes and ran occasionally. I did light jogging, then later added weights and less cardio. Within the first month of changing our eating habits, I lost 17 pounds he lost 22 pounds. He was happy but I wasn’t. I couldn’t really see the results, so as we kept going I always had a piece of clothing that I would try on to see if I was losing weight.

I had a dress that was a size 12, so when I lost 17 pounds the first month the dress was still snug. In the second month when I tried the dress on I had lost a total of 26 pounds and the dress was still a bit snug but not so much. Maybe a week or so later, I tried it on again with a total of 30 pounds. Holy cow, that dress was beyond big on me. It felt like a nightgown. I was so excited about it that I called my mom

I just could not believe the results that I was getting from just eating real food eating the food my body requires. As time went on, we kept eating healthy and we did not eat out for 5 months. For my birthday, I said that I would not eat out unless I was at my ideal weight, which was 150 pounds. On my birthday, I weighed myself and I weighed 158 pounds. I cried like a baby. I really had to rationalize and think about things. I deserve something special. Besides, the last time I had  food at a restaurant was in March when we went on the family vacation five and a half months ago.

To date, I’m a size 4/6 and 144 pounds (height 5’5″). My advice to those who are struggling to lose weight is simply this: Don’t give up! Invest in yourself because it’s worth it. You’ll lose friends and make new ones, so don’t live off the opinions of others. Keep pushing forward. This is your journey so don’t let others put limits on your ability to become a better you!

I have a Facebook fitness page thrive fitness and KC fit ladies. We are a group of ladies who love to motivate others as well as educate ourselves on this journey. I’m also a personal trainer now. 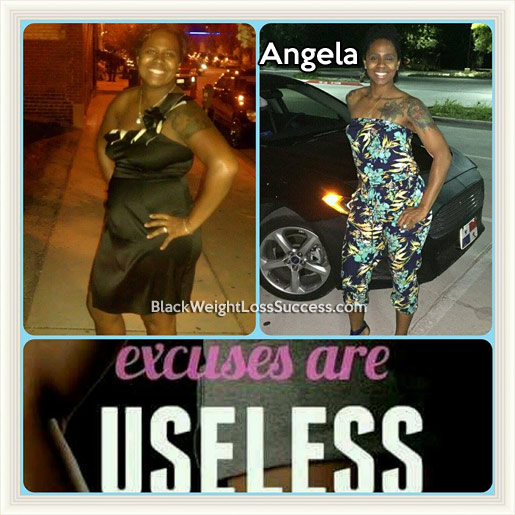