You are here: Home / Before and After Photos / Timyra lost 50 pounds

Transformation of the Day: Timyra lost 50 pounds. This young lady saw her clothing sizes keep increasing while she was dealing with the effects of depression. As a health professional, she knew that exercise could improve the situation. She shared with us how she took action to change her lifestyle. 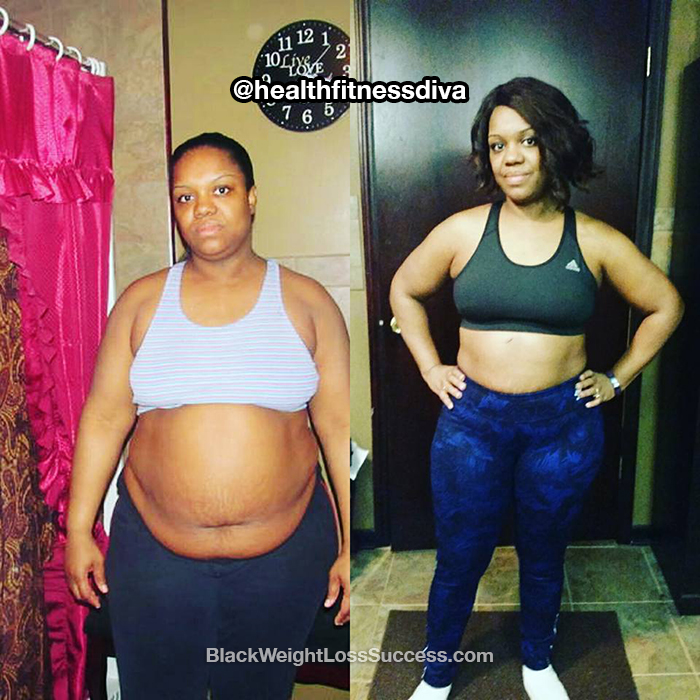 As a young, 20 something year old woman, I was used to eating whatever I wanted and not really gaining too much weight. I weighed about 150 pounds at 5’3″ and thought I was overweight then. It was when I reached 225 pounds that I realized what being overweight was really about.

About a year ago, in September, I had a combination of issues going on. I felt depressed, sluggish and noticed that each time I shopped I had to buy a bigger size. However, the depression was the most difficult issue I was dealing with. As a RN. I knew that exercise could help with mood and feelings, so I made a decision to get started but I wasn’t sure what to do.

One Sunday afternoon after church, I was approached about a Zumba class that was offered at our local YMCA so I decided to give it a try since I loved to dance. I attended and was hooked. Even though I struggled to keep up the pace and my energy, I kept going. When I started that class, I weighed 225 pounds and I now I weigh 175 pounds. It took me a year to lose 43 pounds and at this point I’ve lost 50 lbs. My journey has taken about 15 months (not even a pound per week). My goal weight is 150 lbs.

My motivation was the feeling of accomplishment I got every time I finished the class. There were many times I wanted to give up because it was difficult and easier to just come home, sleep and eat. My Zumba instructor was so engaging and I was very determined to stick to exercise this time, since I had given up many times before (usually within 3 months).

One thing that was really helpful for me was using the My Fitness Pal app and being completely honest about what I ate, no matter what it was. Even if it was just a bite size piece of candy, I recorded it. I made gradual changes because sudden big changes are not good for me, because it would be too overwhelming. The first thing I gave up was pop. Previously, I would drink about 4 cans of regular pop a day. I went through a case of pop a week. Then, I began to reduce my bad carbs, such as white bread, cookies, cakes, bagels and pancakes. I ate those things on a daily basis before and I still eat them, but only occasionally. I focused on protein and made sure that the bad carbs are replaced with vegetables and fruits.

As far as my workout routine, I started off by going to Zumba class twice a week. As I got use to it, I increased how much I exercised and now I workout about 5-6 days a week. I do a combination of cardio and toning exercises for an hour total.

My advice to anyone that wants to lose weight is to start slow. Eliminate bad habits one at a time, not all at once. It is too overwhelming to do that. Be realistic. Losing 1-2 lbs a week is more realistic. Be consistent and keeping going. You will have bad weeks, but keep working at it and set small goals. I set 10 pounds at a time goals, it still feels as good as reaching a 50 pound weight loss.