You are here: Home / Before and After Photos / Deirdre lost 62 pounds

Transformation of the Day: Deirdre lost 62 pounds. Having been a frequent dieter in the past, she didn’t want to continue that cycle. When she took advantage of a free one week gym pass, that was the start of what would become a true lifestyle change that led to a love of fitness. At 52 years young, she is an inspiration! Check out her story. 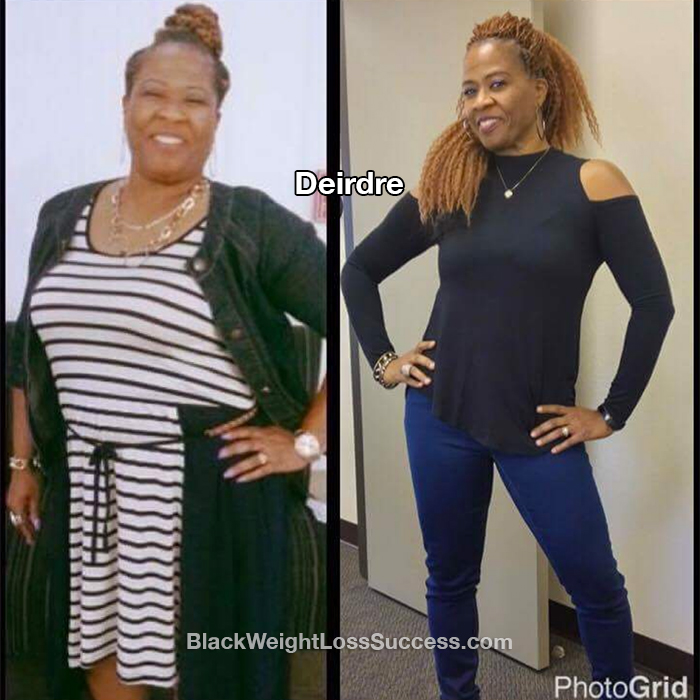 My name is Deirdre M. of OKC. My journey started four years ago in April of 2012. I was 47 years old and weighing in at 215 pounds and just 5’4″ tall, I was considered obese. At that time, a friend of mine gave me a week long pass to her gym. I thought, “Hey, why not give it a shot?” Who knew that would be the beginning of my journey?

I have been a frequent yo-yo dieter in the past and I didn’t want this time to be another lose/gain scenario. One thing that motivated me to stay active was seeing myself in pictures. I was disgusted. It seemed like I took up the whole frame. Maybe I didn’t, but it seemed that way to me. I got tired of not being able to walk up 10 steps in a movie theater without being winded. There were more factors, but really I just simply got tired of being fat.

Initially, all I did was use the elliptical machine and did some ab exercises because that’s all I knew to do. There were some changes that occurred; like my endurance was increasing, but nothing significant weight wise. I kept hearing that I needed to change my diet, but that fell on deaf ears at the time. I thought what I was doing was enough.

During the next three years, I have incorporated Zumba, a class called Dance Fusion, which really improved my endurance, some 6-week boot camps and running. This time, I did experience some weight loss and I even tweaked my diet (due to the boot camps) by incorporating protein shakes and smoothies. However, I still was not happy with my results.

The most significant change happened this year when I joined a gym called TFitness owned by Jonathan Tate. It is high intensity/full body training facility where we are given high protein meal plans in order to release the weight. They also provide moral support, which is wonderful. I work out there 4-5 times a week, sometimes twice a day. During the first three years of my journey, I released only 30 pounds simply because my diet was not on point. This year alone I’ve been able to release another 30 pounds. The main thing I had to cut out was sugar! I never realized how much sugar is hidden in our foods. Once I started on the high protein meal plans the weight began to come off. It’s been slow going as I’ve seen programs where you can lose 20 pounds in six weeks. I decided I didn’t want to rush the process because in the past when I lost weight fast, it always came back, plus some.

Now, I’m cognizant of what I eat. Mind you, I do have cheat meals but I’m mindful to get back on program. I should also mention that during this journey, I had two out-patient surgeries (gall bladder removal in 2012 and a minor knee surgery in 2016) and one hospital stay in 2015 where I was diagnosed with complicated migraines. I didn’t let any of those instances stop me from achieving my goals.

Right now, I am 52 years young and my weight is 153-155 pounds. I haven’t been this small since my early high school years! I am so proud of myself because I never thought I would be doing the things I now do at my age. I’m able to run a 10K and do burpees and pushups; something I’ve never been able to do in my life. I’ve always been athletic, but not to this extent.

I want to be an encouragement and inspiration to the women my age that it’s never too late to get your health in check and to realize that you don’t need a diet. You need a lifestyle change when it comes to food. I would love to become a personal trainer to be able to help older women realize their full potential. My motto now is: “If I can, you can!”