You are here: Home / Healthy Eating / The HCG Diet: What Is It and How Does It Work? 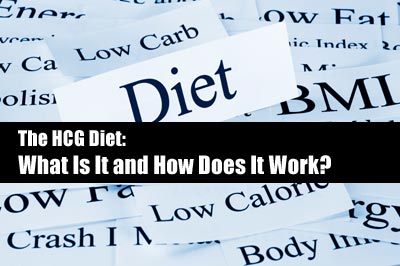 Have you ever heard of HCG or the HCG diet?  It’s been one of the top diet crazes around in the last few years and some people swear by it.  Others think it could cause health issues or that it’s just a fad.  I thought that I’d give you some background info so that you can make your own choice.

What is HCG?  HCG, the abbreviation for human chorionic gonadotropin, is actually found in a woman’s urine during pregnancy. When this was discovered in 1927, it started the journey to the first modern pregnancy tests. To this day, pregnancy tests still use HCG as a determining factor for pregnancy.

But there was something else really interesting about HCG that was discovered as well. Apparently, the substance makes sure that developing fetuses get exactly what they need to grow, no matter what mom has been eating or how much mom eats. The HCG is produced early in the cycle. The fact that women gain weight in areas like the thighs, buttocks, and stomach is impacted by HCG. Once pregnant, these fatty areas make HCG and get it to the baby; that way, if a woman doesn’t get the food she needs during pregnancy, the fat in her body makes sure that the baby is fed properly. HCG levels peak at 14 weeks of pregnancy. It also helps with genital development within the womb as well.

So how in the world does this even relate to a diet and losing weight? About a decade later, a doctor was doing research on the use of HCG in boys who were having issues with hormone imbalance in adolescence. This doctor, A.T.W Simeons, noticed that these boys were losing weight by eating much less and without struggling with hunger. This made him have an interest in using HCG as a diet aid, and in the 1950’s he published a paper talking about its uses; he even developed a regimen to use alongside HCG injections.

Here’s what a typical 26 day cycle of the HCG diet looks like.

Sometimes, the HCG diet lasts up to 43 days (with 40 daily injections or drop doses), but the treatment will cease after a patient has lost 40 pounds before the agreed on time has passed. The last three days of the cycle are without injections so that the HCG is totally extracted from the body before a normal diet is started again. The diet can last no longer than 40 days, because there seems to be some sort of immunity to the drug that develops after that period of time.  So, basically, your body is able to deal with the super low calories because of the affects of the HCG.  Super low calories for 30-40 days…you lose weight (That’s in most cases.  Not a given or fact because each person is unique).

Another, obviously, dangerous part of the HCG diet is that ridiculously low calorie intake. 500 calories does almost nothing for your body. Even if you are trying to lose weight, it is recommended that you eat somewhere between 1,200 and 1,500 calories a day minimum and 1,500 to 1800 minimum if your are exercising. 500 calories doesn’t even touch that. So obviously, you really don’t have the ability to do anything strenuous in terms of working out because you’ll have no energy to do it with. Another issue is that, after restricting your calories that much, you’re likely to gain weight back more quickly when you resume normal eating. Recently, I’ve seen more Homeopathic HCG plans with 1000 calories as the suggested calories per day, which is much better but still very low if you are exercising.

Ultimately, you have to weigh the pros and cons and make your own decision.

Note: The FDA has banned over the counter Real HCG products marketed as weight loss aids and they are illegal.  You shouldn’t be able to find much on the market with real HCG in it right now, therefore the herbs, ingredients, etc in these products varies.  You have to be very careful because you could be allergic to the ingredients or they could be harmful to you. The bottom-line is that the “HCG” drops or shots could be harmless for you but harmful for someone else and vice versa…like any diet pill or aid.  BE CAREFUL! If you decide to try a plan like this, talk with your doctor first.

Does the HCG diet work — and is it safe?