You are here: Home / Healthy Eating / What Is The Deal With Coconut Water? 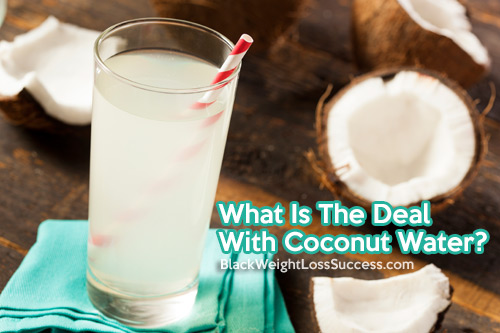 Coconut water has been available throughout the US for about 10 years and has seen rising popularity for the past few years. Coconut water can now be found in almost any grocery store, and is often sold with health tonic-style claims or as a beverage for athletes.

As with most new “fad” drinks in the spotlight, often times the claim are too good to be true. Coconut water is certainly a refreshing drink and a great alternative to soda, but is it really as amazing as some companies make it out to be?

The short answer to this question is yes. Real, natural coconut water is the liquid of a young, green coconut, not the white milk from a brown, hairy coconut. This coconut water contains a few nutrients that are important for human health, such as:

Coconut water is also low in fat and high in fiber. It contains some natural sugar and is fairly low in calories compared to sports drinks and juice.

Coconut water is often touted as being a superior source of potassium but this isn’t 100% true. Other foods such as bananas offer the same or more potassium per serving with additional nutrients that coconut water doesn’t deliver.

All in all, coconut water is a healthy beverage but certainly isn’t the magic tonic many companies make it out to be.  Just like any other beverage, you should be aware of the nutrition in your brand (calories, fiber, etc) as well as any additives.

There are many claims about power of coconut water, from it being a superior source of vitamins and minerals to being more hydrating than water. Some have even argued that regularly drinking coconut water can cure diseases.

While there is no scientific proof of coconut water performing something as miraculous as destroying cancer, you can’t argue that coconut water does have some benefits. For example, coconut water is:

There are unfortunately few studies done on coconut water and health claims. While most doctors agree that it is safe to consume on a regular basis, there are circumstances in which coconut water can negatively affect your health.

The potential health issues associated with coconut water generally arise when people drink too much of it. The saying, “too much of a good thing is a bad thing” rings true when it comes to most health foods and coconut water is no exception. One issue is that it has a high sodium content compared to water and other natural beverages, typically about 13.75 mg of sodium per serving.

Trouble can also arise when people rely on coconut water as sources of vitamins and minerals. Though many Americans are deficient in nutrients, it is because of a bad diet. Therefore the entire diet should be changed to add more nutrition. After all, if you eat fast food everyday drinking coconut water isn’t going to magically improve your health.

How to Find the Healthiest Coconut Water

If you would like to add coconut water as a part of your diet it is important to choose the right type. You will want to carefully check the label and see what exactly is in the coconut water brand you are looking at. Some brands add unnecessary sugar, flavoring or preservatives. For the most health benefit you should find a product that is pure coconut water.

If you have a difficult time finding coconut water or pure coconut water you could try visiting your local Asian Grocery. Grocery stores that cater to the Asian community have sold coconut water for a very long time, way before the drink became popular, so you will likely be able to find a fresh, pure product. You can always pick up a green coconut and cut it open to get the freshest water possible.