You are here: Home / Wellness and Health / Pros and Cons of Colonic Irrigation Therapy 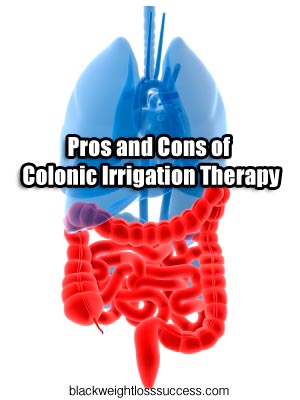 Colonic irrigation therapy is gaining popularity. During the past 10 years, many doctors are hearing from their patients that they have started to receive this treatment for relief of everything from Irritable Bowel Syndrome (IBS), chronic gas, nausea, chronic fatigue and as a catchall detoxifying process. Given that the therapy is neither approved or regulated by the FDA for treatment for any disorder or disease, many people are wondering if there is any real benefit from having a colonic done. Some are even saying that the risks are too great, and colonics can create more problems. Colonic therapy has both pros and cons. Neither side has absolute evidence of either opposing belief and both sides claim anecdotal proof. Before you decide to try colonic irrigation, here are some things you should know.

What is a colonic?

Colonic irrigation therapy, sometimes referred to as colonic hydrotherapy, is similar to an enema but very different. With an enema, water is pushed into the colon through the rectum using a syringe or gravity fed enema bag. The water rarely goes beyond the first several inches of the colon. With a colonic, water is forced up into the colon via a hose inserted into the rectum to fill the larger intestine. The colon and intestine both have a natural cramping reaction to force the water out, pushing out any fecal matter or debris that is held within as well. While the process sounds uncomfortable, it is pain free for most people (some medical conditions could make it painful) and done in such a manner as to be hardly felt at all. At a colonic clinic, you are taken into a private room where you lay on your side with one leg drawn up on a special table. Sterilized medical equipment is used to introduce the hose into your rectum and then the waste water retuned is siphoned directly into a disposal drain so you will not even smell any odor or see any of the waste removed from your body. It is most commonly recommended that you do not have the procedure performed more than once every 6 weeks as the colon and sphincter muscles need to recover from the expansion and expulsion action forced by the colonic.

The Pros of Colonic Therapy

Colonics work to remove bacteria and debris from the colon and intestine that the body has not been able to pass naturally. This can assist in relieving stomach and lower back pain due to chronic constipation. It can also help to promote weight loss (improved elimination and nutrient absorption) and create a sensation of lightness and well-being. The proponents of colonics also state that the removal of the bacteria and debris acts as a detoxifying action. By washing the colon clean, the body may be able to better regenerate healthy bacteria that are needed to aid in food digestion and metabolism. Some people have a difficulty in emptying their own colons naturally and regularly because the modern diet contains processed foods that are difficult to digest, void of fiber and water intake is not enough to aid the natural elimination process. Also, a general lack of adequate exercise means that for some people the muscles involved cannot control the colon efficiently.

The Risks of Colonic Therapy

Oddly enough, the very same reasons given as a benefit of colonics are also stated as the risk in having the therapy done. Medical science is only just beginning to understand the role of bacteria in the intestinal system in aiding metabolism.  There are questions over how necessary, or beneficial, it is to be constantly starting the bacterial growth and flora from scratch. While probiotics are often used in conjunction with colonics, replacement bacteria are not as adapted to the evolved diet as that which was originally in place in the person. Another valid concern about colonics involves the lack of oversight and regulation in providing the therapy. There is no standard certification or licensure for a colonic therapist and no set methods and procedures for ensuring that safe health management practices are used in the clinical setting. Even the equipment used to perform colonics is not standardized and can vary from practitioner to practitioner. Experts advise caution in using colonics as an aid in weight loss as it may create an electrolyte imbalance, especially in the elderly, that can cause serious health problems.

My advice is that you speak with your medical professional of choice before having a colonic to review the pros and cons and get some sound information to help you make a decision.