You are here: Home / Healthy Eating / The Basics: What is Paleo?

Paleo is an eating plan where you eat the foods that your body was made to eat through years of evolution. The concept is that you will be eating foods that your “ancestors” secured by hunting and gathering. You can eat foods such as fish, lean meat, nuts, seeds, mushrooms, spices, herbs, vegetables and fruits. On this diet you will not eat foods that are made by modern means of production such as processed foods, as well as grains and dairy.  People on the Paleo plan also stay away from legumes (beans and peanuts).  The focus is on foods that are specifically made for the human body to burn fat, recognized by the body as food more than as chemicals or toxins and that help you to have optimal energy. 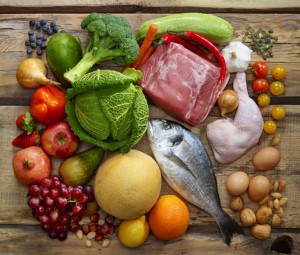 Now…As with ANY diet plan or meal plan YOU have to modify it to make it work for you.  There is no One-Size-Fits All Plan!

That’ being said, I do have some issues with this diet, let me say that upfront.  The first criticism I have of this diet is that it doesn’t take into account various cultures around the world and access to foods regionally.  I think it’s focused on what ancestors of people of Euro-decent would have eaten.  The diet recommended may not have been the Paleo era eating of those in Africa, South America, Asia, etc.  Availability of things like fish or certain fruits would have affected how much early people would have eating certain things.  There are a number of Paleo plans out there, so some have dealt with this issue which is great, but not many.

My second criticism is that as a long term plan, the lack of carbs and the cost of eating this way could be prohibitive for some people. I suggest that you eat any veggie or fruit you want if you are considering this way of eating long term.

Lastly, there are SO many Paleo plans and books.  Some say dairy is ok.  Some say potatoes are good in moderation.  You just have to remember that you are dealing with a theory…and that not everyone agrees with what our ancestors ate and what we should eat.  There should be no surprise about that…look at all the diet plans out there!

Ultimately, only you can decide, through trail and error, what works for your body.  Trying Paleo could help you figure that out, but it’s not going to answer all the questions and issues you have for you.

That being said, let me breakdown the basics of Paleo.  Here are some benefits that you may encounter from eating this way:

What foods to you avoid on a Paleo Diet?

On the Paleo diet you will completely cut out grains and legumes (beans and peanuts). Many studies say that the human body was not made for eating grains and those grains can actually harm the body, but that is still debated. However, one of the main benefits to avoiding grains is that foods that contribute to weight gain, like bread, pasta and baked goods will be avoided as well. Those of you on low-carb plans know the benefits of avoiding grains very well.  Also, there is a huge gluten-free movement going on.   Many people find themselves allergic to gluten and whole grains which can cause digestive issues and in some cases neurological issues.  Some people just feel better in general when they don’t eat grains. In order to follow this diet you will be cutting the majority of grains out of your diet and focusing more on vegetables to replace them.

Many processed foods can contain nasty chemicals and preservatives that early man wouldn’t have encountered (even our grandparents’ food didn’t have some of these chemicals)  Some of these chemicals and additives can be highly addictive to people, such as MSG.  The simple carbohydrate content in processed foods is one of the main reasons why obesity and diabetes is running rampant throughout the world. Processed foods can trick the chemistry in the brain and lead to the person craving processed foods all the time. Many are also high in calorie content and fat content (trans-fat and saturated fat). On Paleo, you cut out the majority of the processed foods from your diet, if not all. It may be hard to cut out all the processed foods but over time you will learn not to eat any of those foods and what to replace them with that is Paleo approved. Remember to watch out for processed meats (read the label). Sometimes a first time Paleo dieter may think that it is ok to eat any meat however most processed meat, such as sandwich meat, is highly processed, full of sodium and not good for you.

Refined sugar is something that you will need to avoid if you plan on doing a Paleo diet.  Concentrated sugar is not naturally meant for the body and can wreak havoc on your blood sugar levels affecting various systems of the body.  High sugar consumption can lead to diabetes and many other problems, as well as weight gain. You will be cutting out all forms of sugar except for fruit which has all natural sugars.  Some people on Paleo do use Raw, unprocessed honey.

Foods to Eat on Paleo

These foods are important to consume and you will find that you are allowed to eat a good bit more than expected on the Paleo diet.

You can find ideas for menus and recipes online.   There are also many books dedicated to the world of Paleo eating.

Paleo for Beginners: Essentials to Get Started

Practical Paleo: A Customized Approach to Health and a Whole-Foods Lifestyle

Well Fed: Paleo Recipes for People Who Love to Eat

The Paleo Diet Revised: Lose Weight and Get Healthy by Eating the Foods You Were Designed to Eat