You are here: Home / Healthy Eating / What is the Keto Diet? 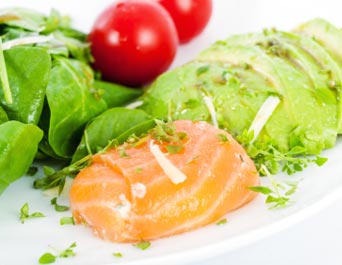 The ketogenic diet, better known as the “keto” diet, is a diet that was originally developed to help people with difficult to control epilepsy (specifically, children with epilepsy). It is a high-fat, moderate protein, low carbohydrate diet. Here’s why it has been recommended for epilepsy: Carbohydrates are important for brain function, usually in the form of glucose. If there are very few carbohydrates in the diet, the liver is forced to do something different to make up for it. The liver converts the fat into fatty acids and a substance known as ketone. Ketone bodies replace the glucose, and are used in the brain instead. Apparently, this state of elevated ketone levels (known as ketosis), actually helps to reduce how often seizures occur in epileptics (not a cure all but it has worked for some people).

Before the keto diet, the original diet for children with epilepsy gave children enough protein for body growth, proper development, and any repairs that may have been necessary. The diet also had just enough calories to help maintain appropriate weight for the child’s age. This adaptation threw in the fats at a 4:1 ratio so that the body can be forced into ketosis. This is achieved by excluding high-carbohydrate foods such as starchy fruits and vegetables, bread, pasta, grains and sugar, while increasing the consumption of foods high in fat such as cream and butter. Full-fat dairy is an incredibly important part of the Keto diet.

If you’ve understood everything that I’ve talked about, you can understand how the Keto diet could be adapted for fat-burning. It’s actually become an popular way for bodybuilders and weight loss enthusiasts alike to lose excess fat and tone up. The low carb fashion of the diet is what draws most people to it, especially because it would seem counter-intuitive to eat a high fat diet in order to lose fat (even though the body needs fat too.)

This also reduces the insulin production in your body. When your insulin production is at almost zero, the amount of Glucagon is increased greatly. At this point in the keto diet, your body’s fat burning ability is kicked in to high gear and fat storage is slowed or halted.

So what can you eat on the Keto diet? Here’s a basic list of ideas.

As with any diet that goes to extremes, there are some things that you will need to watch out for. First off, your body stores a lot of carbohydrates to start with and if you don’t exercise much, you can get through a day without a lot of carbs. The problem comes in when you’re active and you aren’t eating a lot of carbs. You’re going to burn a lot of those carbs, and you’re going to burn all of your glycogen stores. Here’s the problem: glycogen holds up to four times its weight in water. So yes, not only are you starving, you’re also dehydrated, and you won’t be able to have enough energy to do anything because fat burns more slowly than carbs do. As with any weight loss plan, you should talk to a doctor about all the risk before even considering a plan like this.  There are a lot of low carb plans out there for you to choose from, so consider all the options if you want to go low carb.