You are here: Home / Before and After Photos / Maxi lost 66 pounds

Maxi lost 66 pounds. She achieved her weight loss goal back in 2015 and worked hard to keep the weight off. In 2016, she was blessed with a pregnancy, but she also gained all the weight back as a result. She shared with us how she got her fit body back after having her son. 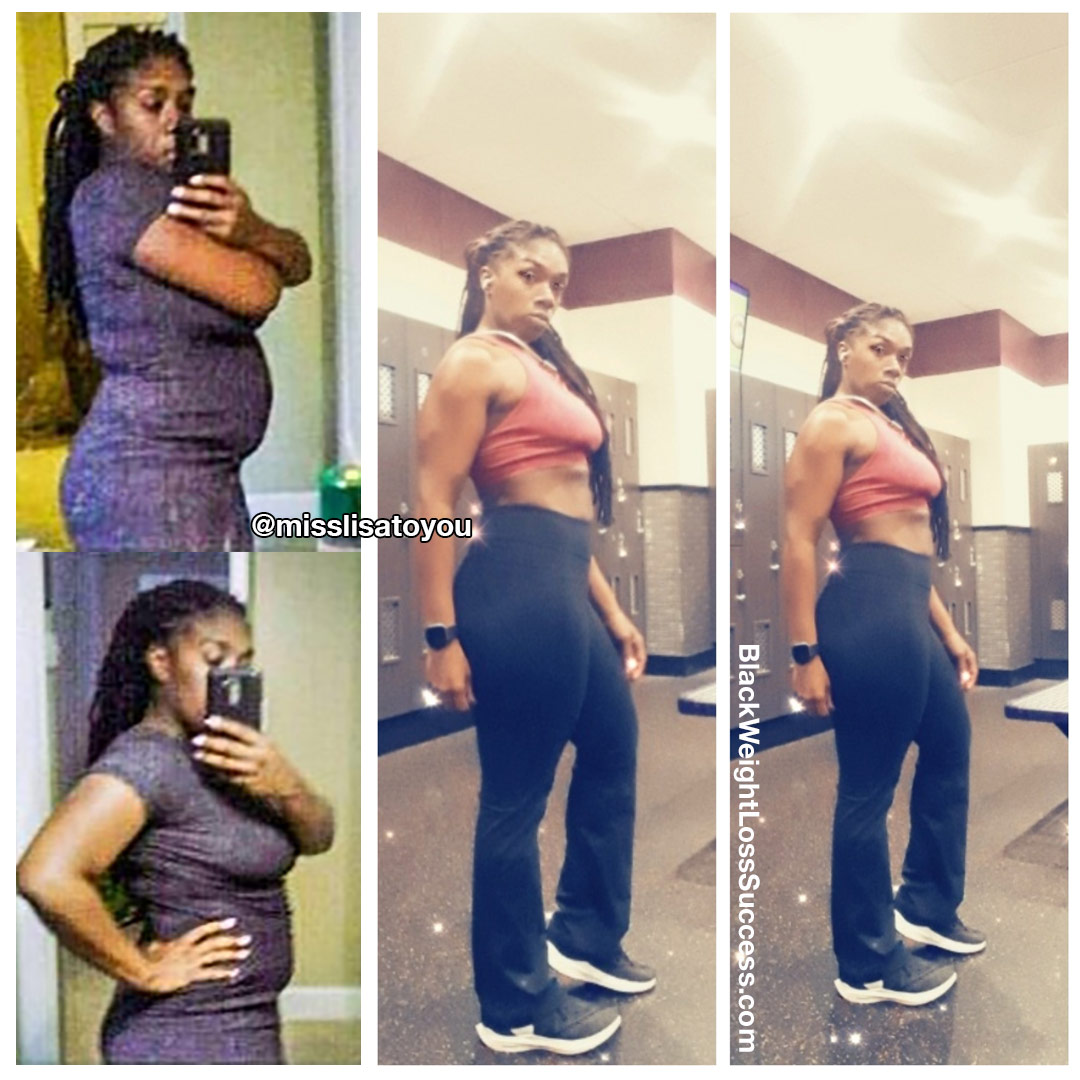 What was your motivation?
When I started my journey six years ago, my motivation was to lose the weight. I was ready and determined to get rid of it. My husband has always been very athletic. He always works out, and I wanted to lose weight, so it worked.

I “tried” to lose weight when I was growing up, but nothing ever worked until my church went on a fast (we were only supposed to eat fish). A light bulb went off for me. I started to research nutrition heavily, specifically teaching myself about the various foods I could eat to lose weight.

Now, I believe in all-natural, whole foods. In the past, I would eat a sausage egg biscuit sandwich with a BIG Polar Pop Fountain drink every morning for breakfast before going to work. When I started to make changes, I did it meal by meal.

Instead of that Polar Pop soda, I made a BIG smoothie (LOL) and scrambled eggs. I began to have veggie omelets as well. That was something I could eat every day. When I got bored with my breakfast options, I would end up looking up more healthy recipes to try (Breakfast, lunch, etc.).

What was your workout routine?
I did a lot of walking/jogging up to three miles every other day outside on a trail. I incorporated various basic exercises, like lunges, squats, using the benches on the trail, and just doing basics (like push-ups, jumping jacks, etc.) I did cardio and strength training (bodyweight only) on those never-ending bike trails. Once you get far enough, you need enough strength to make it back to the car!

I eventually ended up in the gym, lifting weights once I lost some weight. The sag is real. Weightlifting helped trim and sculpt my figure tremendously. I never even wore a waist trainer. By the time I tried one, my waist was too small.

Quick arm toning with resistance this morning. Now I feel like super mom and ready to get some sun!💪 #momswithlittleboys #workout #beactive #slaysaturday

Starting weight/Current weight
My starting weight was around 215 pounds. I got down to 145 pounds by the end of 2015, and I weighed 145 pounds when I found out I was expecting. In 2016, I was blessed with a son. He arrived in 2017. I gained ALL of my weight back during my pregnancy plus some. I weighed in at 221 pounds after he was born.

Tell us about your pregnancy and the process of losing weight after giving birth.
My pregnancy was a struggle. After the first five months, I couldn’t do any kind of fitness. My child was literally weighing me down, so I indulged more than I usually would – You know, for the baby. Sciatica and pregnancy don’t mix, whew! I don’t wish that on anyone! I had my son in January 2017 via C-Section because he was just chilling (LOL).

I promised myself that I would get back at it once he arrived, and I did just that. I lost the weight quickly by doing what I had done before. By April 2017, I began my journey. Yes, I had the baby with me in my jogging stroller. I stopped indulging as much and started moving. By August 2017, I lost the majority of the extra weight. My stomach was becoming flat again.

Now, I wouldn’t say I stopped indulging completely. I’d have my cheat meal, but that meal would typically come once a week on the weekend (Fridays). I would still eat normally that day, but one of my meals would be a cheat meal. I was losing an average of 9 – 10 pounds every month. I reached my goal earlier this year (2020), weighing in at 155 pounds. I’d say my 2nd transformation took two years.

Being a new mom, my journey had its ups and downs.

I had to start over completely. When I started, everything ached. I had not worked out in a year. I wanted to give up, but I have brainwashed positive mantras into myself;

…and I kept pushing. Of course, my hubby was ready to join me anytime. All I had to say was, “Let’s go.” I still had sciatic issues and carpal tunnel problems from pregnancy, but I knew that getting back in shape would take the pain away, and it did. I just worked through it. No matter how slow, just go! I spoke LIFE into myself. I told myself I could do it again! I told myself I could get my stomach flat back without surgery. I’m not against surgery. I’m just not a hospital person, LOL.

What is the biggest lesson you’ve learned?
The biggest lesson I have learned is that this journey doesn’t end. It’s going to take time. If you concentrate on perfecting what you do during that time, what you’re working towards is going to arrive in no time! It will literally slap you in the face.

What advice would you like to share?
My advice to beginners is to take it day by day. You have to train yourself to eat healthier. Eat the healthy foods you love to eat over and over again. Don’t eat what you don’t like! (How does that even work?) Do you like to eat out? Recreate those meals at home in healthier versions.

For exercise, do simple exercises. Basic! We all have to start somewhere. Don’t compare yourself to anyone! We are all in different chapters. If you were to see a girl like me in the gym, please don’t ever be intimated. Be inspired because I know what it feels like to want to BE better!