You are here: Home / Before and After Photos / Natasha lost 95 pounds 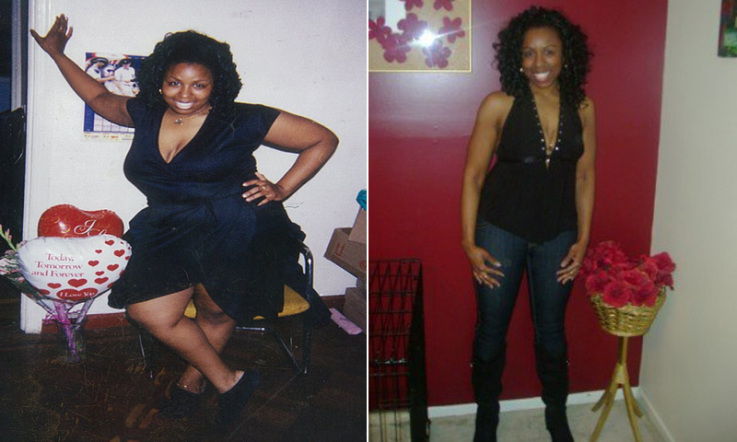 In our online community we always ask what people’s weight loss goals are.  Natasha says, “I’m in maintenance mode now, after having lost 95 lbs. I strive to continue to exercise, eat right and to do right by my body, soul and spirit.”

One of the other BWLW community members asked her about her workouts and she said, “I haven’t focused on one particular area, but by working out (at least 3-4 days a week), I have managed to tone my body all over.”

“Breaking Point: I was pregnant (and eventually miscarried) at the age of 21. I miscarried at five months, during my second trimester. I was 185 pounds when I first learned I was pregnant, and I gained a total of 40 pounds during that five-month period of time. Granted, I was never a small person to begin with, but I was tipping the scale at 225, and I knew something would have to give. There was never an explanation as to why I miscarried, but in my heart, I always knew that my weight gain was a factor…”

“How I Lost It: “…I began the Atkins’ Diet in August of 2003, and by the end of my first month, I’d already lost 20 pounds. I continued on, and by February of the following year, I was down to 160 pounds. I also signed up for a gym membership, and that helped me maintain my new-found weight loss for quite some time.

I went back to school in January of 2005 to begin working on my Master’s degree, and by the summer of 2006, I had regained 20 pounds. This time, I knew that I couldn’t go back to cutting carbs. I was going to have to learn how to eatcorrectly if I wanted to maintain long-lasting, lifetime weight loss. I joined Jenny Craig in October of 2007. The pitch at that time was, “Lose 20 pounds for $20, plus the cost of food.” Well, I was 175 when I entered the program, and by January of 2008, I rang in the new year at my lowest weight to date: 155 pounds…”  Click here for the full details of how she lost the weight.