You are here: Home / Healthy Eating / The Top 4 Reasons You Should Avoid Fast Food 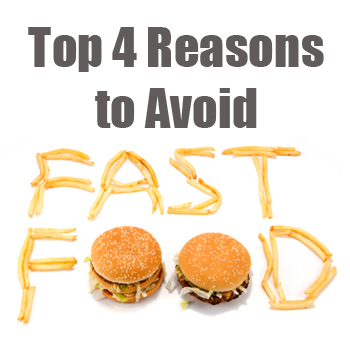 Quick, easy, and economical, fast food is around every corner. With mouth watering smells wafting through the air, the temptation to go in for a quick meal seems too difficult to resist. Do a little research first, and consider the high price a body might pay for a cheap meal.  Here are my top reasons you should avoid fast food.

Fast foods are loaded with fat, calories and sodium.  A common order is burger and fries with a drink. Consider that the average person, with this one meal, can consume almost an entire day’s worth of calories, while falling far short of the nutrition requirements. Consider also, that someone eating this has consumed several day’s worth of fat and sodium in one quick stop. Despite the high caloric content, these foods are low in nutrition and with the lack of fiber and other real nutrients, the body will feel hungry soon after, setting up another situation for adding calories.

Fast food businesses make their money by volume.  They can sell cheap food because they purchase low quality ingredients that are filled with additives and chemicals designed to hide the poor quality of the actual food. The meat contains growth hormones, and a very high fat content. Much of the grilled meats is brushed with margarine on the grill, adding transfats and calories to a selection that most think of as healthy. Propylene glycol is added to retain moisture to food, such as crisp lettuce leaves and plump chicken strips. It is also an ingredient in antifreeze. Sodium phosphate is a foaming agent used in soap, also used as a food additive. Titanium dioxide is an artificial color, it is also sunscreen. By law, MSG must be listed as an ingredient. There are however, many ways to get around this. If a company purchases a spice mix from another source, it is simply listed as spices and artificial flavoring. Ammonium sulphate is another additive used in bread, and in fertilizers. Some artificial colors used crushed red bugs for the coloring and dough conditioners use human hair or duck feathers. Lost your appetite yet?

The emphasis on speed has it’s price as well. Fast food workers generally are the lowest paid and most pressured employees. Food gets left out, cleaning can get sloppy or skipped altogether. Many soda and ice machines are left unclean until they literally don’t work. They are frequently filled with bacteria and mold.

Many outbreaks of food borne illnesses can be traced to fast food. This can be for several reasons. One is the source of their products. Slaughterhouses are under constant pressure to increase production. This work is dangerous when done at a fast pace. Injured workers are common and even some deaths. Mistakes happen during the butchering process and cross contamination is possible when a line worker’s knife moves too far and pierces and intestine. This has been the cause of several e-coli outbreaks. Coupled with the practice of using meat from animals who were raised on large amounts of hormones and antibiotics, this fast meal no longer looks so appetizing.

What do you think?  Leave your comments below.