You are here: Home / Healthy Eating / Is Wild-Caught Fish Better Than Farm-Raised? 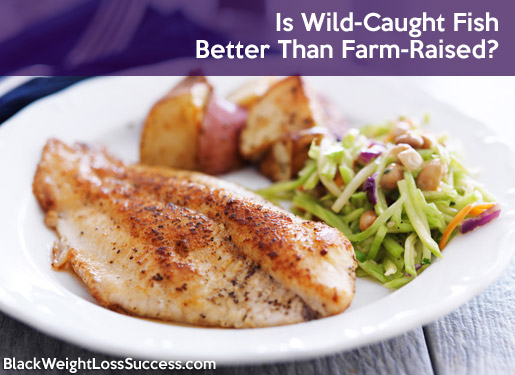 When you go to a fish market or just the seafood counter at your local market usually you can buy wild-caught or farm-raised fish. Some people don’t believe there is any difference and will just buy based on a factors, like price or color, whereas others may opt for wild-caught, believing it tastes better and is healthier since it’s more “natural”. Is this really the case though?

Why Do You Need Fish in Your Diet?

Before delving into the subject of farm-raised vs wild-caught, it’s important to understand why fish is so important in a healthy diet. Here are just a few reasons why you should eat fish at least twice a week:

Yes, there are concerns about things like mercury, so you should eat fish that is low-mercury. The most common fatty fish you’ll find in stores:

After understanding the benefits of why you should consider adding fish to your meals a few times a week and which fish are the healthiest, the choice of farm-raise vs. wild-caught should be considered.

Fish farming is also known as aquaculture. It is a very common method of raising fish with roughly one third of the world’s consumed fish coming from it. As natural sources of wild fish deplete, it’s only to be expected for this number to increase even more.

There are a few advantages as a consumer that comes with buying farm-raised fish.

If you are on a budget when it comes to groceries, purchasing farm-raised fish will save you money. Farm-raised fish may potentially be more nutritious depending on what the particular farm feeds them though there is no way for a consumer to test this themselves.  You have to do your research on specific farmers/brands for more info.

Helping the world’s wild fish population while saving a few bucks is a tempting reason to go with farm-raised fish, but consider these disadvantages first.

Interestingly, while some fish farms claim their product is far healthier because of their diet they feed studies show that this isn’t always the case. One study done by the Indiana University, as well as 5 other research centers, showed a significant increase of toxins in farmed fish vs wild fish. In contrast, this study claims that levels are the same and therefore no reasons to be a cause of concern.

So What Should You Buy?

Like most things that come to diet, the decision to eat farm-raised fish or wild-caught fish is up to you and what you believe to be the healthiest.  Each catch is different because the fish is coming from a variety of sources, so it’s had to know for sure about the nutrition…that’s why doing your own research is key. Generally it is agreed that the benefits of eating fish are so important that even if farm-raised fish is somewhat nutritionally less superior you should still eat it if the lower price is an important factor.

Wild-caught fish harvested responsibly could be more nutritious so if your budget allows, splurging on this fish every now and then isn’t a bad idea. Women who are pregnant may need to cut out fish due to mercury, but that’s really something to be discussed with your doctor. Small children or those with weak immune systems should strive to eat wild-caught, low mercury fish over farm-raised. Those who don’t enjoy the taste of fish are urged to spend some time trying different recipes rather than avoiding this food group altogether. If you want to avoid fish all together, you can take fish oil or omega oil supplements.