You are here: Home / Healthy Eating / What is Compulsive Overeating?

A few years ago, a good friend of mine was secretly dealing with compulsive overeating.  She would eat until she would pass out.  She sought out help from Overeaters Anonymous and I learned a lot about compulsive overeating from her struggle.  Her medical professional told her that high blood pressure, diabetes and digestive issues were directly related to her overeating (she was binging on a lot of sugary and salty foods and eating very little fiber).  If you see yourself in the information presented in this article, please seek help. 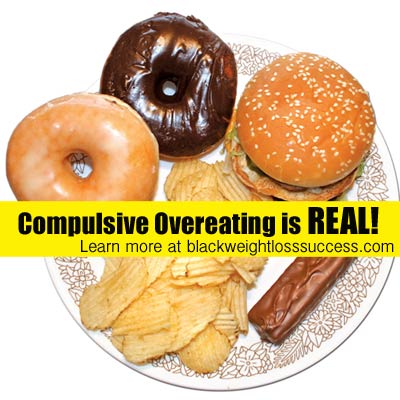 The major signs of a compulsive overeater is that they will consume anywhere between 5,000 to 15,000 calories in one meal. The recommended calorie intake for an adult who is sedentary is set between 1400 and 1600 calories per day. Compulsive overeaters also will engage in behavior that is termed “grazing.” With grazing, the person eats all day long, but never in controlled amounts. Compulsive overeaters also show signs of anxiety, depression and guilt in regards to their eating behaviors. They are frequently, but not always, overweight. Many who suffer with this compulsion also have a history of trying a variety of diets but not experiencing success with any one healthy eating style. The compulsion to eat is as strong as a withdrawal craving for an addictive drug and without proper treatment; it is difficult for the person to recover on their own. Compulsive overeating cannot be resolved through a simple exercise and diet program; behavioral modification therapy is recommended.

Many of these symptoms are associated with other eating disorders, specifically bulimia. Unlike other disorders, compulsive overeaters do not also have compensating behaviors, such as vomiting or use of laxatives.

How compulsive overeating can damage the body

Much of the damage that can result from compulsive overeating is a result of the additional weight gain it can cause. Obesity, and morbid obesity significantly increase your risk of –

Compulsive overeating can also create a cycle of anxiety and depression related to the amount of money spent on food and related diet and fitness program attempts; as well as low self-esteem. The rapid eating style and rapid weight gain pattern associated with compulsive overeating causes significant stress on all the systems of the body as well.

What you should do

If you suspect that you suffer from compulsive overeating, or suspect that someone you love has this problem – it is important that you pursue help from a medical doctor and a qualified counselor. The most successful treatments for compulsive overeating involve the dual approach of modeling diet changes while helping the person overcome behavioral patterns through modification therapy. Since most compulsive overeaters are also suffering from obesity, the additional supervision of a medical doctor is advised to help return them to health. It is also important that you find, and get involved with, a peer support group during the recovery process.