You are here: Home / Healthy Eating / 8 Benefits of Eating Locally and Organically 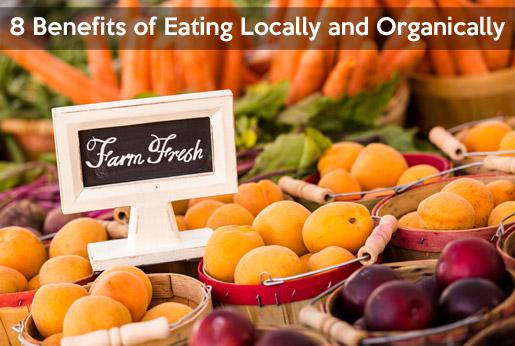 One of the most beneficial things you can do for your overall well-being and health is to eat locally grown foods, especially those that are organic, as much as possible.  There are many reasons why it is a good idea to eat organic foods from your local farmer’s market or foods that are sourced locally by grocery stores. Even non-organic local produce has benefits. Here are just a few benefits to consider.

Eating food grown locally is sometimes less expensive than conventionally grown foods at the grocery store. Since local growers don’t have to add delivery and storage expenses to their prices you can often save money. This is especially true in remote areas like Hawaii, Alaska or any place that has to import their groceries over sea.

A study published in Environmental Health Perspectives shows that those who eat organically have lower levels DAPs, or dialkylphosphates, in their bodies. DAP’s coincide with levels of organophosphates in the body so the lower the DAPs, the fewer pesticides have been consumed.

It’s not just hearsay that organic and locally grown foods just plain taste better than conventionally grown produce. Even dairy products and meats that were grown organically taste better to many people. Produce grown locally is typically fresher and often picked at ripening rather than picked early and ripened in box. Organic produce is free from many chemicals which improves flavor.  Look for food that is IN SEASON to get the best tasting food.

Locally grown produce is healthier and more nutritious, even compared to organic grocery store produce. As mentioned above about ripeness, locally grown foods don’t just taste better because they are ripe but this ripeness also contains more vitamins and minerals compared to food that has been shipped and sitting for a while. Also, when produce is picked or harvested before it’s ripe, it will still ripen but simply can’t contain the vitamins a naturally ripened fruit or vegetable does.

Similarly to pesticides in produce, conventional meat and dairy tends to also be exposed to  antibiotics. Many people feel that meat and dairy products that are organic often taste much better as well as being potentially healthier. The antibiotics used in non-organic dairy and beef cows can harm the healthy bacteria in our stomachs which in turn weakens our immune system. Many people wonder if antibiotic use in food is contributing to antibiotic resistance in terms of fighting illness.

Local farmers and gardeners often struggle with their way of life. In today’s world many people are becoming more conscious of where there money is spent and who their money supports. Choosing to give your money to local farmers in a win-win situation. You get a much higher quality food and help them continue to grow the produce they raise and that we need.

This might seem like an odd benefit but when you create a relationship with local growers the way you eat can really improve. When you shop at a grocery store it is easy to get stuck in a rut of buying the same produce. This limits the variety of food you eat and the way you eat your food. As you start buying locally from different farmers you will often have opportunity to try produce you may never have bought normally. You also will learn to buy foods seasonally and may even get tips from the growers and fellow farmer’s market goers about new ways to prepare the produce.

A Word about the Organic Label

Just because a label says something is organic doesn’t necessarily mean it is completely organic. First off, the USDA only requires 95% of the ingredients in organic foods to be organic. Organic produce may still contain pesticides which have been carried in the wind from neighboring non-organic fields. You can’t control the bees and the wind.

Organic crops can even contain GMOs which migrated from neighboring crops, much like the pesticides can do. Also, locally grown food doesn’t mean it’s organic. Local farmers can and do use pesticides or possibly antibiotics in their animal products so always ask if this is a concern for you.

It’s generally agreed that organic food is healthier than non-organic and local foods are healthier than grocery store produce. Making an effort to eat more organic and locals foods is a great choice to improve your diet. If you aren’t able to go completely organic, check out this list of foods you should try to eat organically.