You are here: Home / Before and After Photos / Colenthia lost 32 pounds

Colenthia lost 32 pounds by embracing a raw food diet and exercising.  Part of her motivation is her sister who had an unsuccessful weight loss surgery and passed away due to obesity.  Here is what she shared with us:

The after photo was taken on April 11, 2013.  So far, I have lost 32 pounds by going raw (raw vegan) and exercising.  My heaviest weight was 310 pounds.  Now, I am at 278 pounds and my goal is 160 pounds.  I lost my sister in 2002, due to obesity.  She had gastric bypass weight loss surgery. Unfortunately, hers was not successful. When I went to the doctor in January of this year, I was weighing 310 pounds.  He informed me that I would be a good candidate for weight loss surgery. Knowing that I was against the surgery, I was furious. I became frustrated. Through my Facebook friends, I have learned about raw food dieting. I exercise 5 days a week, twice a day for an hour. I don’t have access to a computer, so one of my Facebook friends framed the January and April picture (below) so that I could share it.  My goal is to prove you can lose weight naturally. I am against the surgery. So far, I am losing 6 lbs every two weeks. 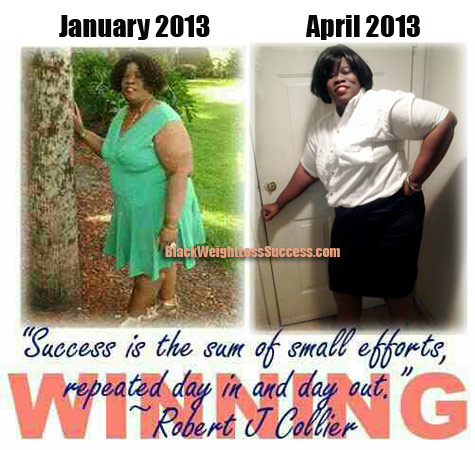