You are here: Home / weight loss / Food Packaging and Labeling Could Be Incorrect 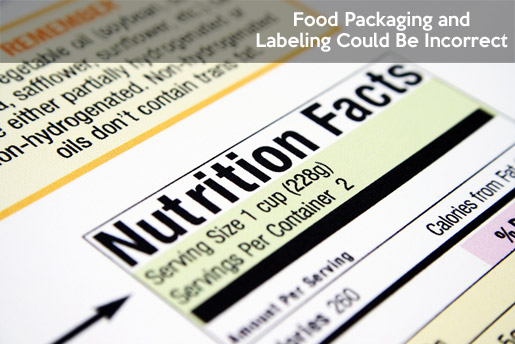 Calorie counting is one of the most universally common means of losing weight. Diets focusing on weight loss, whether it’s Paleo or vegetarian, often times use some type of method of counting calories or portion sizes to ensure that there is a calorie deficit. A calorie deficit means you consume less calories than you burn. When this happens your body is more prone to lose weight as long as it’s getting the right mix of food. (i.e. eating 1200 calories of pure sugar a day would not be a recipe for weight loss).

Calorie counting is surprisingly easy as most American food manufacturers have to include in-depth nutritional analysis on food labels. As a person eats their meals throughout the day they can write down the nutritional information of food and tally it all up to learn how many calories they’ve consumed. Much of this information is now available online as well since it’s been cataloged and collected. Though this method works well for many, sometimes people find themselves hungry, not seeing the results they were looking for or even losing weight when they are only trying to maintain weight or gain muscle.

The reason for this may be because of inaccurate food labels and packaging.

How Truthful Are Food Labels?

It is both surprising and worrying that food labels could be inaccurate at times. There are two main ways labels are inaccurate:

This first inaccuracy isn’t so much of a lie as it is a trick to get people to buy a product. Certain terms like “natural” and “made with real fruit” are used to convince consumers to buy the product, believing that they are buying something that is healthy. In reality there are no rules as to what the product says as long as it is in some way true. For example, an energy bar that is filled with chemical additives and heavily processed ingredients could still be labeled as “natural” just because an ingredient used in it is whole almonds. Similarly a fruit leather being sold as a healthy product “made with real fruit” could in reality only contain 1% of whole fruit.

Don’t trust the bright, bold labels on foods claiming that it is healthy. Turn it over and read the ingredient list.

The calorie count listed on food labels can also be inaccurate- either being higher or lower than it should. This is obviously quite a problem for someone relying on calorie counting

A study done by the American Dietetic Association showed that restaurant meals were roughly 18% higher in calories than stated and popular frozen dinners from grocery stores were 8% higher. When they added free side dishes into account, the average restaurant diner ate roughly 245% more calories than what the menu says.

High fiber foods, nuts and meats may actually be lower in calories than food labels estimate. In a Times article highlighting research done on the subject, scientists found that the energy expended trying to digest these foods isn’t taken into account on nutrition labels. Upwards of 25% of the calories in one serving of almonds may be used during digestion and thus not contributed towards overall consumed calorie count. Similarly, foods high in insoluble fiber may not be used by the body at all but execrated. In that case quite a high percentage of the calories isn’t used.

Aside from these two issues, labels may also not list potential allergens, containments and sometimes not include all of the ingredients. The latter being unfortunately common in supplements.

Knowing that your food labels may not be accurate makes calorie counting and elimination diets difficult. It is important to carefully read labels and if there is a term you are uncertain of, take a moment to look it up on your phone. If you have allergies, such as gluten intolerance, it is extremely important to scour the label and if it isn’t clear whether the food has gluten, pass it by. If you are calorie counting and eat a lot of foods high in carbohydrates or low in fiber, the food label is probably pretty close to being accurate.

If you are on a low carb or Paleo style diet you may not be getting enough calories if you are just going by the labels. Increase the amount by 100 to 200 grams and see how you do. If you hit a plateau or begin to gain weight you will know you were eating enough before. You may instead find that you continue to lose weight while also feeling more satiated because you were eating fewer calories than you thought.

The best way of knowing exactly what you are eating is to eat as much whole foods, unprocessed, unpackaged as possible. A diet rich in whole foods will give you nutrients, vitamins and minerals you could never get from just eating processed meals. Additionally, if you do slightly overeat you aren’t likely to get the same ill effects.