You are here: Home / Before and After Photos / Is Soy Really Bad For You? 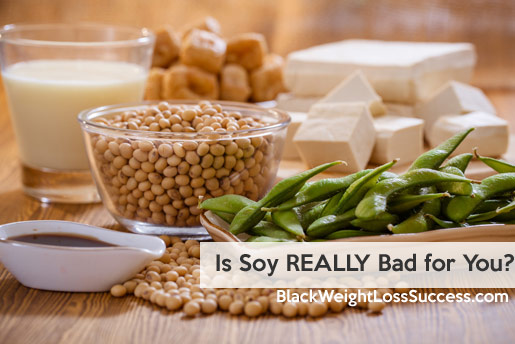 People have been eating products the come from soy beans, like soy milk and tofu for hundreds of years. That’s why it’s amazing to me that soy just may be one of the most controversial health foods in the world right now. Soy and products containing soy have become very popular in the US and are often toted as a healthy alternative to meat. Soy-based products such as infant formula are quite common and many food manufacturers use soy as a filler.

Despite soy being promoted as a healthy food, there are claims backed by studies that show that may not be all that it’s cracked up to be. There are also plenty of personal stories from people who claim to have suffered health issues from eating soy. However, there are also studies and stories that tote soy as a superfood, bringing many health benefits to those they eat it regularly.

So, what is the truth about soy? To reasonably decide whether soy is safe or not, it’s important to see the research for yourself and make your own informed decision.

Typically the health benefits surrounding soy are some or all of the following:

There are quite a few health organizations that fully support and recommend soy in the diets of everyone from infant to adult, men and women. Researchers have many theories on the health attributes of soy in the regular diet and have studies that support their belief.

In support of eating soy, the University of Maryland Medical Center has a reference article with all study references containing positive results. You may visit that reference by clicking here.

When it comes to health concerns of soy it is interesting to note that for nearly every health claim or study showing soy in a positive light, there is contradictory research. This is why soy can be such a controversial topic.

When it comes to soy and preventing cancer, there are various different studies showing the complete opposite effect. In a study by the British Colombia Cancer Agency, researchers found that major properties in soy can actually stimulate breast cancer cell growth. Another study by the Department of Food Science and Human Nutrition had similar findings. Studies on soy and other types of cancer found no increase or decrease in cancer cell growth at all.

As for soy and benefits on menopause symptoms like hot flashes, some studies don’t support this. The Department of Medicine at University of Minnesota is responsible one such study. The Columbia University included soy and soy products in a similar study but results were inconclusive.

There are a few other theories that soy can also:

It is also important to point out that people can all have different reactions to soy in their diet. Similarly to milk and lactose-intolerance, certain people can have severe reactions from eating soy or soy-based products. These reactions can also occur in people who suddenly eat a very large amount of soy, something even pro-soy doctors and scientists advise against.

Keep this in mind: There are so many foods that we are told are bad for us these days, from wheat to milk to agave, that you could pick almost any food and there maybe some thought or research that says it’s bad for you

A Word About Fermented Soy

Fermented soy comes in the form of natto, miso, tofu and tempeh. In comparison to Asian countries, Americans eat very little fermented soy. Some believe this is why many Asian cultures don’t have the health issues Americans have with soy.

The Japanese and Chinese have far fewer cases cancer (breast and prostate, primarily) and some researchers came up with the theory that this is because of soy in the diet. While this hypothesis wasn’t exactly incorrect, following the traditional Asian diet that includes fermented soy was excluded. Studies are being done to determine the health benefits and/or concerns of fermented soy in the diet vs whole soy.

Should You Avoid Soy?

The decision whether to eat soy or not is up to you. Since the topic isn’t black and white it’s important to come up with an educated choice by researching the effects of soy. Until that time you can limit your soy intake if you have health concerns and focus on eating fermented soy products rather than whole soy. If you feel like you are having adverse reactions to the addition of soy in your diet, stop eating it and consult your doctor.  I personally don’t have any issues with drinking soy milk or eating tofu.  It’s a personal choice.