You are here: Home / Weight Loss Advice / Sleep Apnea: Can Being Overweight Affect Your Sleep?

Sleep apnea is shockingly common in American adults, with nearly 22 million suffering from the disorder according to the American Sleep Apnea Association. Another very prevalent health issue among Americans is obesity. The CDC reports that approximately one third of Americans are overweight.

What is Obstructive Sleep Apnea? 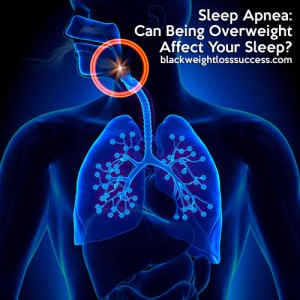 Obstructive sleep apnea, or OSA, is characterized as being a disorder in which a person stops breathing for 10+ seconds repeatedly while asleep. This happens when the throat muscles relax and collapse. The throat and tongue muscles naturally relax during sleep but those who are overweight or obese have extra soft tissues in this area.

Being overweight and/or obese is one of the biggest risk factors for OSA. However there are additional factors, such as:

Also, though men are more apt to developing OSA, it is still very common in women.

Obstructive sleep apnea can present itself in a number of different ways. Here are just a few different symptoms of OSA:

Typically OSA symptoms occur together. For example, your partner may have been commenting about your very loud snoring at night and you also find yourself waking up randomly at night feeling out of breath. Perhaps in the morning you have a headache and feel like you got hardly any sleep at all.  Many times a loved one or spouse will actually notice that you stop breathing in your sleep and point it out to you.

If you feel like you may experience some of these issues, it is very, very important to consult your doctor as soon as possible. OSA is a very serious disorder.

Obstructive sleep apnea isn’t simply a sleep disorder. OSA is linked to many other health problems, either as precursor to another illness or as a symptom.

Daytime drowsiness is one of the most common dangers. This might seem like an annoyance but much like the experience of those with insomnia, consistent daytime drowsiness impairs your function which can lead to accidents. Consistently feeling like you aren’t rested also increases stress and can cause depression.

Where OSA can cause fatal problems is when it begins to affect your heart health. In a study featured on health.harvard.edu, an astounding 1 in 7 individuals with OSA had some type of heart trouble whether a stroke or heart attack, had to have bypass surgery or had died from cardiac disease within 10 years. Though participants were given treatment options, very few followed through.

There are a few different treatment options for sleep apnea. Generally treatment is successful when it is combined with a weight loss regimen or other lifestyle changes such as quitting smoking.

Oral devices look very much like the mouth guard a boxer or football player wears. This device pushes the lower jaw forward slightly which helps the airway to open. This device doesn’t work for everyone and tends to be more suited for people with a very mild case of OSA or loud snoring.

When a person has moderate to severe OSA and can’t get relief from a CPAP or other positive airway pressure devices then this device is ideal. This treatment is called Inspire UAS Therapy. It was only introduced in 2014 but has proven to be very effective.

In some instances, surgery is required if the OSA is very severe and possibly life threatening. In other cases, where OSA is very, very mild, taking a nasal decongestant before bed or just sleeping on your side rather than your back can provide relief.  Losing weight is a part of some treatment plans as well. I’ve heard from many ladies who we’ve featured about how their sleep apnea was lessened after losing pounds. Don’t try to self diagnose. Talk to a doctor or specialist about your specific condition and the options that will work for you.