You are here: Home / Healthy Eating / What is a Vegan and Why Should I Consider Being One? 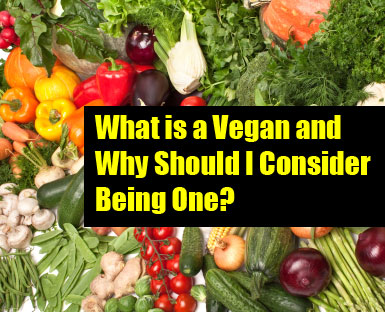 A vegan is a person who consumes no animal products whatsoever. This includes not only meat, but eggs and all dairy products.  Many (but not all) vegans even avoid fur, leather, down, silk or anything that was once part of, or produced by an animal (i.e. honey).  It is also common for vegans to avoid using products that include animal testing of any kind in their production. Many people become vegan to promote animal welfare and rights. They hold a strong belief that animals should not be manipulated or exploited, in any way, by man. Others come to the vegan way of life because of environmental concerns. That being said, a large group of people have found that the health benefits are numerous and are the prime motivation to embrace veganism.  Weight loss is definitely one of those reasons.

Obviously eating meat harms animals. However, many items that come from animals can be attained without this harm.  Many animals that are used to produce goods are kept in cramped quarters, pumped full of hormones and antibiotics and are slaughtered when his or her productivity diminishes. By boycotting such products, vegans believe the demand will lessen and that there would not be a need for animals to have to endure such a life.

A plant-based diet is easier on the planet over all as well as animals. It takes a lot of energy and land to fulfill the needs of animal farming. Vast quantities of food must be grown and the waste from these mega farms sends large amounts of methane into the atmosphere every year.  Water ways affected by waste runs can contain remnants of the large amounts of hormones and antibiotics that are fed to farmed animals. All of this has a detrimental impact on the environment. It is widely believed that the world could be fed on the available land if everyone ate a plant based diet, as the return on raising animals for meat is very inefficient compared to that of raising crops for man.

Most vegans adopt this lifestyle because of their moral belief about the ethical treatment of animals. However, the health benefits are numerous. Since plants have virtually no cholesterol and very low in fat, it is an extremely healthy way of eating. Naturally lower in calories, most vegans are very lean. The risk of some cancers associated with meat eating, those of the stomach and bowel notably, decrease dramatically. Many people have found that digestive problems are eliminated and report feeling lighter and stronger with an abundance of energy. Most will say that even conditions such as asthma and migraine headaches were either vastly improved or disappeared entirely.

Among the other significant benefits of living vegan is the considerable savings to the wallet. Meat can be expensive and most vegans buy fresh fruits, veggies, etc. and prepare their food at home. Going vegan takes commitment, but for some, the rewards definitely outweigh the disadvantages for them personally and the planet.