You are here: Home / Before and After Photos / Shayla lost 40 pounds

A few years back, I was at a job I hated, didn’t like the way that I looked, I was single, and overall depressed. I refused to go to the doctor to get on medication for my depression but knew that I needed things to change before it got worst. I might have looked like everything was fine on the outside but I was miserable on the inside. It was in God’s hands to place me at a job that I would love and be happy & content with. It was also up to God when he would deliver my soulmate to me. Realizing that there was only so much I could do with all the things I felt were wrong in my life, I decided to focus on the one thing that I knew I had control over.  That it was my weight.

I started at a local recreation center that had a membership for the city residents for only $5 a month. Who can beat that?!  The only problem was that the workout facility was really small. Like teeny, tiny. However, they had two ellipticals, two treadmills, one stationary bike, a stair stepper and a weightlifting machine. That was it!  I used it all to my advantage and began going there religiously. I started losing weight but after awhile I hit a plateau and needed to challenge my body more so I joined 24 Hour Fitness. It was hard for me at first because I had anxiety and didn’t like being around large crowds. I liked the fact that they had group workout classes and that what I started doing a few times a weeks. After awhile I was losing the weight that I wanted.  Within 8 months, I lost about 40 pounds. That was great and all, but I wasn’t completely doing it the right way. See, you never heard me mention anything about eating right. That’s because I didn’t really. I wanted a quick fix and so instead of eating right, I just ate less. I would have chocolate milk for dinner. Not with my dinner, but AS my dinner. I wanted to be skinny! The thought of being healthy or fit never crossed my mind. I did pretty much anything and everything to get SKINNY. Diet pills, cleansing, barely eating, going to the gym multiple times a day.  I had reached my goal of skinny.

It didn’t last long. As soon as I stopped doing all of the drastic things I was doing to lose weight, it all came back and I had put on even more weight than before. I had gotten up to 220 lbs (it might have been higher but I refused to step on the scale after that).  This was the heaviest weight I had ever been, including during my pregnancy with my son who’s now 12. I met the man of my dreams (my now husband) and got comfortable. We’re foodies, we like to eat and that’s exactly what we did. I was back to being unhappy about my weight and had zero motivation to get rid of it.

Last March, we purchased the P90X dvds to do with my now husband.  We lasted about 3 weeks and then gave up. I figured I would just be content with being fat & happy, but that’s not who I was. Not that I’ve always been skinny, but I’ve been pretty slim and active for the most part. I didn’t feel like I was being true to who I really was. I couldn’t wear any of the clothes in my closet and I started to become depressed again. In April of last year, I bought a Groupon deal for a 4 week bootcamp and bought one for my cousin who had just had a baby to go with me. We could be accountability partners. We did great when we were doing the workouts but never really made a change in our eating habits and didn’t workout outside of the bootcamp which was 3 days a week. Then in July, my boyfriend at the time proposed to me and we decided to have a destination wedding. That for sure should have been my motivation but it still wasn’t enough to get me to workout.

It wasn’t until January of this year that I was introduced to Insanity and decided to give it a try. The first month was the hardest thing I had ever done. By the time the second month came around, I still wasn’t seeing that much changes in my weight and decided that I need to get serious with my eating. That’s when things started to happen. When I committed to working out AND eating better everything changed.  I couldn’t afford a gym membership when I started working out and working out in the comfort of my own home with workout DVDs makes me push harder. I’m not worried about other people staring at me. In the past year I have lost 40 pounds and 27 of those pounds have been since January of this year since I’ve been consistent with eating right & working out daily. 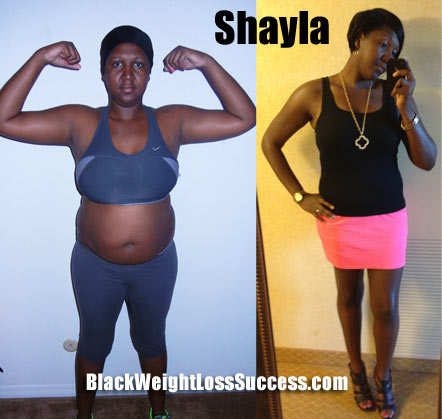 What was your motivation?

I have a husband & child to live and be healthy for but my ultimate motivation is myself self-esteem. I feel like I’m living again! I no longer have depression and can honestly say that I have confidence in myself for the first time.

How did you change your eating habits?

I don’t diet. I’ve made a lifestyle change. I eliminated soda, beer and fast foods.  Also, I chose to grill and bake my meats while adding fresh fruits & vegetables to my diet daily. I drink lots of water and I also replace one meal a day with a protein shake.

What was your starting weight? What is your current weight?

How long did your transformation take?

I first began working out in March of 2012 and I’m still a work in progress, so as of now it’s been 16 months.

Thank you so much for allowing normal woman like me to share our stories. I love the website, the challenges, the advice and I’m a big fan of the Facebook page. Keep up the good work 🙂