You are here: Home / Exercise / Weight Loss and Yoga? 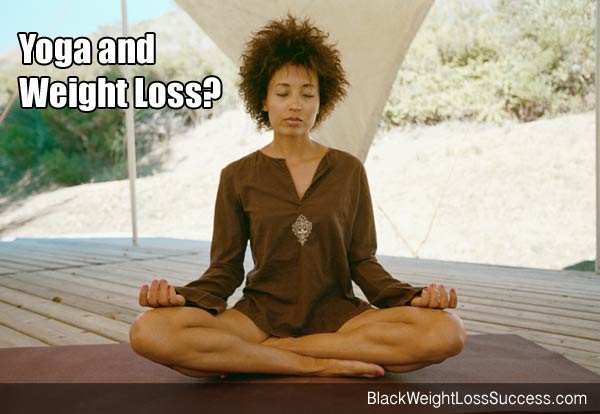 When it comes to yoga, looking at videos of tiny women draped in spandex, bent and twisted up like pretzels can be quite discouraging. Many women look on and immediately dismiss any possibility that they could ever do yoga. “I’m too big.” or “I’m not flexible.” has been uttered far too many times. If you do a quick search online, you may be pleasantly surprised by how many women of all shapes, sizes and levels of fitness practice yoga on a daily basis. Or, better yet, how many people actually use yoga to lose weight.  Yes, yoga can be a viable mode of exercise to lose pounds when added to a balanced workout schedule.

Generally, weight loss happens when a person’s calorie intake is less than their calorie expenditure. In other words, you’re burning more calorie than you’re eating and your body metabolizes fat. We know that. So, in the traditional sense, yoga wouldn’t top very many people’s lists of means for getting fit. However, when you use the term “yoga”, that’s a very general statement. There are countless practices done in a variety of environments that each target and enhance different parts of the body.

If all of these different branches had to be categorized into two classifications, there would be mental yoga and power yoga. Varying upon perspective, both classes can aid in your weight loss experience.

These forms of yoga enhance the functions of the mind. Your brain serves as the conductor for the rest of your body. It sends signals to your cells, giving instructions every minute of every day. With a clear and controlled conscious, you’ll be in a better position, mentally, to tackle tasks that require dedication and focus- such as exercise.

Mental yoga will help you feel more connected to your body. Potentially, it can eliminate deep seeded body image issues, allowing you to accept and embrace your body’s uniqueness. This will make exercise less daunting. You won’t be doing it because you have to or because you feel bad about yourself. Your primary focus will be to enhance your best qualities and live a healthier lifestyle. Because you deserve it.

Much more vigorous and high impact than mental yoga, power yoga is done with burning calories in mind. Ashtanga and Vinyasa are two forms of power yoga that are ideal for weight loss. Many studios have also incorporated “hot yoga” into their list of offerings. Done in studios with rising temperatures, muscles are strengthened with 70- to 90-minutes of activity. You’ll be sweating off the calories the entire time.  Your flexibility will also be improved.

A Little Bit of Both

Even better is when you find a style, such as Kemetic yoga, that incorporates the best properties of each category. Reminiscent of the original form, Kemetic yoga dates back as far as the art along Ancient Egyptian pyramid walls. Many of the poses in Kemetic yoga are tailored to increase elimination and purification of the body’s blood and organs. Additionally, instructors assist followers in strengthening their mental awareness. Between detoxification and pushing your limits mentally and physically, Kemetic yoga is a great relief. The combination of these properties creates a powerful trio that will really aid you in losing weight.

It goes without saying, yoga won’t burn the same amount of calories as cardio, but it is a staple in the weight loss routines of much of America’s population. Many celebrities assure that daily meditation and yoga practice is what has helped them maintain their physiques. It helps to loosen stiff muscles (which works amazing when trying to keep the cramps away after Leg Day at the gym), and build up your endurance. Don’t think so? How long you can support your entire body while upside down with just two fingers as your support. Yeah…I thought so. *Smile*

As with any form of exercise, yoga won’t help you shed the pounds on its own. You’ll have to put in just as much, if not more, effort than with traditional means. Ever heard the saying, “Abs are made in the kitchen”? Find a form of yoga that makes you feel comfortable, pair it with a healthy diet and a couple minutes of cardio.  Along with other forms of cardio (like Zumba or walking) and strength training, you’ll be on track to see the pounds drop right before your eyes.

“Mind over a matter” is more than just a saying. Don’t let your weight or physical condition deter you from embarking on the rewarding journey formally known as yoga. It doesn’t matter if you aren’t flexible, frequent practice will give you that flexibility. It’s no different from beginning a weight lifting routine or making the decision to start running. At first it’s not that easy, but after a while…you get stronger.