You are here: Home / Before and After Photos / Yas lost 102 pounds 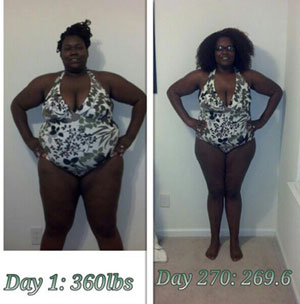 I am ready to share my story. I have been over weight most of my life but was pretty active playing softball and being in the Marching Band in High School and College. There were many things that motivated me to lose the weight and get healthy. I had a miscarriage right before getting married in May 2011. I took it pretty hard and ultimately left the Doctorate program that I was in partly because of depression. After the miscarriage I continued to gain weight. In April 2012, my maternal grandmother got really sick and was in the hospital for about a month before finding out that she had lung cancer along with the High Blood Pressure and Diabetes that she had already been diagnosed with. She ended up passing away a week later. I did get to see her before she past and it really was a terrible experience. I knew at that point I had to do something about my health.

Fast forward to May 2012. My husband and I had just purchased our first home that had upstairs! I always said that I didn’t want a home with stairs. I could barely get up the stairs without stopping. So, because I wanted to be healthy for myself, my husband, my family, and my future children is why I lost the weight.

I have lost 102 lbs since June 20th 2012. Initially, I lost it by walking using Walk-Away-The-Pounds, cutting out all drinks except for water, using myfitnesspal and drinking nutritional shakes (Shakeology) for my breakfast. I eventually added in dancing and two a day’s workouts. I did some awesome boot camps through Groupon. I started working out using Turbo Fire this past January. I am now doing Insanity and feeling great!

Check out her blog – TheGirlyEngineerGettingFit! 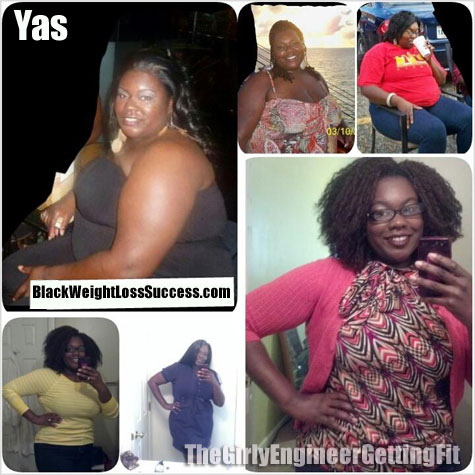