You are here: Home / weight loss / Have you had these 6 Essential Health Tests? 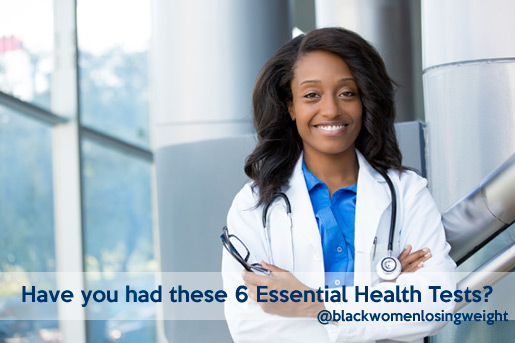 As the old adage goes, “an ounce of prevention is worth a pound of cure”. Routine checkups, like a regular pap smear and gynecological exam, with your doctor are important for maintaining your health and exposing health issues. These 6 health exams are particularly important for women to have, but many are a must for our husbands and children.

Testing blood pressure is usually done at any appointment but can also be done at home or at a free blood pressure machine at a drug store or grocery store with a pharmacy. Blood pressure seems to be such a normal part of a health exam that it’s easy to forget just how important it is.

Diabetes comes in 3 forms: Type 1, Type 2 and Gestational. Adult women are more apt to developing Type 2 than Type 1. Gestational Diabetes occurs during pregnancy, as you’d expect. Diabetes is a disease that can cause or aggravate other health issues like hypertension, numbness in limbs, kidney disease, heart disease and gastroparesis.  Talk to your doctor about early signs of pre-diabetes, like insulin-resistance. An excellent source of information on diabetes is the American Diabetes Association.

HPV is short for Human Papillomavirus, a disease which is the most commonly transmitted STD in the United States. The most common way HPV is diagnosed is by a visual examination of present genital warts. However, women are also tested for HPV when a pap smear is done. A pap smear will show abnormal results if HPV is present, and if it is, the doctor will then test the pap smear sample for the virus.

The Human Papillomavirus has approximately 100 different forms or strains, most being fairly harmless. However some strains can and do cause cervical cancer in women. Strains 16 and 18 are responsible for a whopping 70% of cervical cancer cases in the US. HPV can also cause other types of cancer, including genital and oral cancer. You can get HPV without actually having intercourse and many people come in contact with the virus as teens.  Many men carry the HPV virus (and other strains of genital warts) without symptoms and can unknowingly pass it to spouses and girlfriends. Click here to read more about HPV.

Breast cancer is the second leading cause of death in women in the US. The American Cancer Society predicts that in 2015 approximately 40,000 women will die from breast cancer and an additional 230,000 women will be diagnosed. Mammograms are effective in showing breast cancer before the lumps are even able to be recognized by touch. A mammogram is essentially an X-ray taken of the breast that can be done at a breast health clinic or right at a hospital with the equipment.

Though a mammogram doesn’t mean the cancer can effectively be treated, it does give a window of opportunity for a slow growing cancer to be found and removed or otherwise treated before it would have become a serious issue. Breast cancer can be a fatal disease and can lead to extensive surgery like mastectomies and potential deadly chemotherapy treatments. Mammograms are often done on an annual or biannual basis once a woman reaches her 40s.

HIV testing is extremely important for women, particularly those who are sexually active with multiple partners or engaging in any risky behavior (like sex without condoms). There are 3 different ways to test for HIV: mouth swab, urine test and blood test. A blood test is the only way to know for certain if you have HIV or AIDS. Testing can be done at your doctor’s or through an anonymous lab test.  Many cities have clinics where you can be tested for free.  It is so important that we get tested and tell our brothers and sisters in the African American community to get tested as well. Based on current statistics from the CDC, an estimated 1 in 16 African American men and 1 in 32 African American women will be diagnosed with HIV infection if the current rates of infection persist.  WE can change that, and testing is key to stopping the spread of HIV/AIDS.

HIV and Aids are both deadly diseases that affect the immune system. Typically if someone is infected with HIV but immediately begins treatment, they can drastically extend their life. However, if the HIV has been left untreated and develops into AIDS, the success of treatment diminishes greatly. Since the HIV/AIDS epidemic began in 1981 approximately 39 million people have died. The threat of this disease is present all over the world. You can read more about the global effect of this disease here.

You may not have heard of this type of health screening test but it is a valuable tool for judging whether you are overweight and therefore open to weight-related health issues. This measurement can be taken by your doctor and also done at home. It measures the circumference around your stomach and compares it to a healthy waist circumference based on race, age, gender and other factors.

It may seem a bit odd for such a simple test to be considered mandatory for health screenings but it is powerful. Even a person with fairly slim build and a health BMI could still have a large abdominal circumference than they should. Extra fat in the abdomen can lead to a whole host of health issues including hypertension, heart disease, high-cholesterol and diabetes. Check out this article for instructions on how to measure your own waist.

It is generally advised for a healthy woman with no present health conditions to visit their physician annually for a checkup. At that time you would have a pap smear, colonoscopy and other tests like the ones above. Though many of these tests aren’t included in a normal physical exam, it is worthwhile to ask for them to be done on a yearly basis.