You are here: Home / weight loss / The Basics: What are Uterine Fibroids?

Fibroids, specifically uterine fibroids, are a common health issue among women during their childbearing years. Exact statistics of women affected by fibroids is difficult to determine since they generally have no symptoms.

The OWH claims that anywhere from 20% to 80% of women will develop uterine fibroids by the time they are 50. On the other hand, the Mayo Clinic claims as many as 3 out of 4 women will have uterine fibroids during their life. It is extremely likely that you have or have had uterine fibroids if you are a woman between the ages of 30 and 50.

There is much misinformation about uterine fibroids going around, especially in relation to fibroid and uterine cancer. It is important for every women to understand what fibroids are and how they may affect her health, especially black women.  I’ve battled fibroids and more than half of the women in my circle of friends have fibroids, so I know that the stats have some merit.

What are Uterine Fibroids?

These tumor-like growths are benign (noncancerous), often going undiagnosed due to being so small and causing no symptoms. There is no correlation between increased risks of uterine cancer in women with fibroids.

Uterine fibroids are a growth often located on the walls of the uterus, however there are 5 different types of fibroids that can occur: pedunculated, subserosal, submucosal, and intramural. Here is a diagram of the locations of types of fibroids. 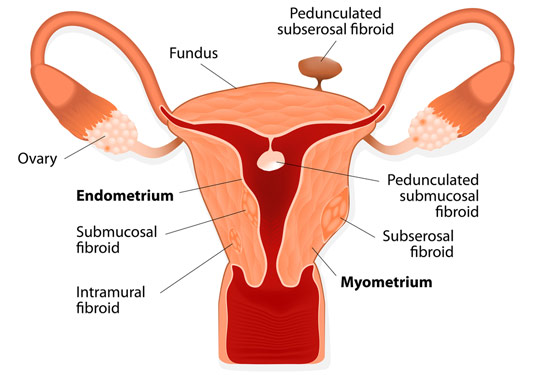 Fibroids are often surprisingly discovered during an ultrasound, MRI or large ones may be felt during a routine pelvic exam.

There is no answer as to what exactly causes fibroids. There are some factors that may increase your risk of developing them however.

The development of uterine fibroids is affected by the estrogen hormone which is why the growths occur after puberty and generally shrink at menopause. Women who begin puberty and their menstrual cycles earlier, before the age of 10, seem to be more prone to developing fibroids.

If women in your family have a history of uterine fibroids you will be more likely to develop them yourself. Uterine fibroids are less common in women who take birth control and have already had children, but that’s not always the case.

Effects of Fibroids on Health

Though most women live totally unaffected by uterine fibroids, and may not even know they have them, there are occasions when these growths can cause issues. Typically these fibroids are large in size or are in an area of the uterus that affects other parts of body.

Some of the most common symptoms of problematic uterine fibroids includes:

Majority of the time small fibroids won’t affect fertility or the growth of an embryo in any way. Abnormally large fibroids or those within the uterus cavity may prevent the proper growth of an embryo, leaving the women infertile until it’s removed. They may also cause issues further down the line in pregnancy as the baby develops.

Symptoms of uterine fibroids aren’t usually serious but should be diagnosed and treated as soon as you suspect there is a problem. This is especially important if you are trying to get pregnant.

Despite having no certain known cause, most medical professionals will agree that there is a correlation between excessive growth of fibroids and hormone imbalances.

Like mentioned earlier, fibroids begin to develop after puberty and shrink away after the onset of menopause. During this time of fertility women have the highest levels of estrogen they will ever have. Other hormones responsible for the imbalance theory includes progesterone and xenoestrogens.

Women who have many uterine fibroids or have issues with the growths tend to have higher estrogen levels or low progesterone levels. Estrogen causes the cell growth within the fibroid so too much of the hormone causes abnormal growth. Similarly, progesterone inhibits cell growth so if the levels are too low you may still develop fibroids even if you have healthy estrogen levels.

The third hormone, xenoestrogens, are synthetic or natural estrogen-like hormones that disrupt the endocrine system. Not only can these hormones mimic estrogen, thus causing an imbalance, but they also affect all other hormones in the body. They may cause them to increase or decrease.

Xenoestrogens could very well be a primary cause of a hormonal imbalance. They also cause a multitude of other health issues, including weight gain. You can read more about this potentially dangerous synthetic hormone here.

If you are diagnosed with fibroids your doctor will likely give you a few treatment options. If the growths aren’t causing any problems for you, you may just want to forgo treatment. Women with a family history of fibroids or those who experience mild symptoms should explore all treatment options with a medical professional.  You can also seek out a naturopathic doctor or certified herbalist.

The removal of fibroids can be done with or without surgery depending on the individual case. Nonsurgical treatment can be as simple as taking a birth control pill which will help correct the problem by balancing your hormones. Common surgical methods include myomectomy, uterine fibroid embolization (I had this procedure), and hysterectomy. A myomectomy is many times suggested for women wishing to have children or those who are young enough that they may change their mind later down the line. A hysterectomy is the complete removal of the uterus and usually suggested to older women who are done having children or in a very severe cases of fibroid growth.  Uterine fibroid embolization is when the arteries leading to the fibroid are blocked to cut off the blood supply and shrink it.

There isn’t much that can be done in preventing the growth of fibroids. However, you can improve your overall health and lessen the chance of developing problematic fibroids by eating healthy, whole food and exercising. Limiting contact to chemicals and other such products will also help to lessen the amount of synthetic hormones entering your body and causing hormone imbalances. Check out this link for a list of the most common sources of xenoestrogens.

Uterine fibroids are a fairly normal part of a woman’s life in today’s world. Though the idea of tumor-like growths in your body is very alarming, there is no evidence of prolonged health issues or an increase in uterine cancer. If you suspect you have fibroids make an appointment with your OBGYN to have it checked out.