You are here: Home / Before and After Photos / Overcoming Past Tragedy: Tiffany lost 41 pounds

Let’s share some Black Women Losing Weight love and positive energy with Tiffany who lost 41 pounds.  She has overcome many life trials and tragedy including suicide, bipolar disorder, weight gain due to medication, and terrible abuse in her past.  She is on a mission to lose weight, get healthy and live well.  Here is what she shared with us about her life and weight loss journey: 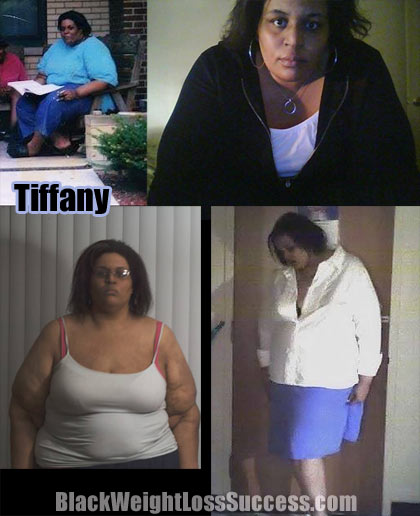 My journey started 7 years ago. There’s a lot to my life. I had the cards stacked against me from birth. My mom was a teenager and drug addict, I was adopted out to a woman who I turned out to be miles more intelligent than, which caused tremendous conflict- physical and emotional abuse. I was bullied in school.  A tall, quiet, smart kid who reads and gets straight easily isn’t really going to be the most popular at recess. I was being sexually abused by my neighbor’s daughter who was 7 years my senior. By 4th grade, I was paranoid and beginning to hear voices. By 7th grade, I was delusional and my moods were unstable. By 9th grade, I had attempted suicide and got sent to a psych hospital and was diagnosed with Bipolar disorder. I was 14.

They gave me medicine like lithium and Haldol. It was 1992 and the medicines were archaic. I began to put on significant amounts of weight. I kept going in and out of hospitals, being diagnosed with Schizoaffective Disorder. At 16, I was a victim of statutory rape, too mentally ill to fight off the 33 year old man who I believed thought I was beautiful. Instead, he said I was cute and then I knew it would be like all the other times I had been used. I developed quickly. By age 12, I was 6′ tall wearing a C cup bra. At 16, I was 6’1 and wearing a double D. I felt as if my breasts were the cause of being looked at like meat and thought that for a long time. Kinda still do…

The previous year in school I was sexually assaulted by a kid who kept touching me during class movies. After one particular hospital stay, he saw me coming down the hallway. They had changed my meds to Depakote, Mellaril, and a few others. I had put on more weight. He looked at me and said, “Tiffany. You got fat.” and walked past me, never touching me again.

At 16, after an attempt to run away from home, I got sent to a group home. They upped my Depakote in the hospital while I was waiting to get in. I was 250 lbs at 6’1 when I got to the hospital. When I left five months later, I was 338 lbs. They restricted my diet down to 1200 calories. I still kept gaining weight.  I saw my share of horrors at that home. I ballooned up to 400 lbs by the time it closed. Got sent elsewhere. I was very ill and they kept increasing my Depakote. 3500 mg a day is beyond the recommended dose. I had been diagnosed with a difficult personality disorder from years of abuse and this is how they kept me subdued.

I went into the state hospital two weeks before my 21st birthday in 1999. Lots of horrible things there too. I ballooned up to 460 lbs and was taken off the Depakote. I developed bad eating habits along my journey in the psychiatric system. A lot of the meds I was on increased your appetite AND made you fat. Depakote and Zyprexa were and are notorious for this and I was on both at the same time. I got out of there and was on less medication but my pain from my past haunted me. I ate badly. My roommate was 750 lbs at one point and I remember thinking I can’t let that happen. Luckily it didn’t but I came close.

I branched out on my own at the age of 25. I was still very much mentally ill, had several suicide attempts, one almost successful- I died and was brought back. In 2005, I was so psychotic it was unreal, but I had also had the flu. I couldn’t keep anything down. It came out either end. I went into the psychiatric hospital after being in an emotionally and psychologically abusive relationship. They fed us on trays and had given me a diet one by accident. I ate it a discovered that it tasted really good. I got out and bought some good food but I was still mentally unstable. They changed my meds as a last ditch effort to help me. They gave me Geodon, which was revolutionary as it helped keep your weight down.

After having a nervous breakdown one night and subsequently discovering the answers I was looking for to the pain in my life I started my recovery. I had been called ugly my entire life and one day I saw a picture of myself and knew they were wrong. Went to the doctor and got weighed.  I went from 460 lbs to 389 thanks to the flu. Lol. I looked up healthy eating and started my journey. I got down to 328 and plateaued.

During my fat loss journey I got raped by my ex boyfriend, sent to the hospital but still managed to lose weight. I began to heal from old wounds with my therapist’s help. I moved out of my first efficiency apartment and into a bigger one bedroom apartment. It was 2007 and I was 29. Had a job. There were restaurants all around me. I was farther away from the gym. I lost my job and went back to school, quit smoking and the weight crept back. Crept back up to 411 lbs! I was so angry. I gave up for a good 2 years. From 2009-2011 I maintained my weight.

I went vegan and lost 23 lbs., but the lack of meat caused me to get sick. I moved away from that city last December and set goals. Started eating meat again and hitting the gym like mad. I lost 30+ lbs in two months! My scale is wonky so I’m getting a Withings Wi-Fi scale (I’m a geek. Lol). My clothes are falling off me. Feels great. Last time I checked I was 370 pounds, that’s down from my starting weight of 411 pounds.