You are here: Home / Before and After Photos / Tyesha lost 162 pounds with weight loss surgery

Let’s show some love to Tyesha who has lost 162 pounds with gastric bypass weight loss surgery.  Her emotional journey is very moving! She was a part of Atlanta Biggest Loser Couple’s Edition with her husband in 2011. Here is what she shared with us:

My name is Tyesha Dean. After years of being overweight due to emotional issues stemming from being molested for over 10 years(ages 5-15), enough had became enough. At 36, I walked into a doctors appointment and was told that my molestation was the reason I could not have children. Even though my heart was broken, my life begin to change. I had to deal with these issues that were trying to overtake me, but after crying and a lot of soul searching and praying, I decided to make a difference and not become a statistic. I would turn my life around and motivate other women in the same situation as me. So the first thing I had to work on is my image, I had to shed the years of hurt and abuse that was masquerading as pounds on my small frame body.

I had a gastric bypass on 12/27/12. The last 7 months have not been easy. I had a lot of complications, but I have lost 162 lbs. My weight the day of surgery was 367 pounds and today I am at 205 pounds. My husband and I were on the Atlanta Biggest Loser Couple’s Edition in 2011. I lost 25 lbs the first couple of weeks, but after that, trying to compete with people that weighed 200lbs less than me began to take its toll, so I was quickly eliminated. Even though I was eliminated, I still kept working on to lose another 50 pounds. using the skills and eating plans I had learned about.

In 2012, my diabetes and high blood pressure were writing a book about my life and the ending couldn’t lead to anything else but a tragedy, I knew I had to do something. So, I decided looking into weight loss surgery. After losing my father at the young age of 56 to diabetes, I didn’t want to follow suit.

Since my surgery, there were a lot of downs, but my life has been blessed with the simple things that made it worth it. Things people take for granted everyday, like painting my toe nails, fitting in normal size chairs, wearing a seatbelt, picking up something off the floor, and my highest moment…being able to cross my legs.

If you need anything else, feel free to contact me..thank you!!!!  For more information on Tyesha, please visit Tyesha Dean.com 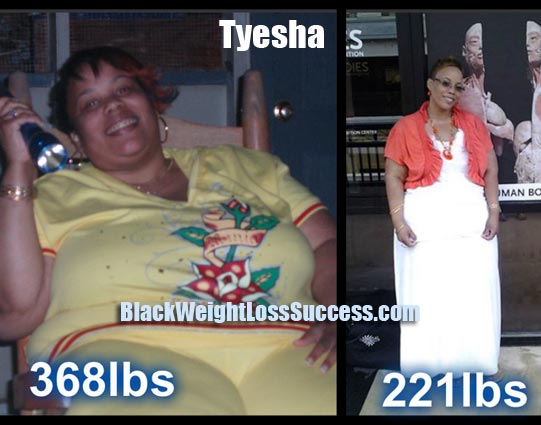