You are here: Home / Before and After Photos / Akeema lost 91 pounds

Let’s show Akeema some BWLW love and congratulations for her 91 pounds lost.  After dealing with the pain of losing her mom, she was able to change her life and find greater fitness through belly dancing and adopting a plant-based eating lifestyle (vegan).

Here is my pic and my story. I was typically an overweight child, but was able to grow out of it and lose weight in college. During my college years, my mom got ill and I was failing all over the place.  Grades, health, relationships and the whole nine. When I came home from school, I was getting prepared to be married and mom passed away. Being so devastated I just continued to let myself go, to the point of reaching over 320 pounds. I spent all of 2010 crying, praying, hoping for a change, and then a girlfriend invited me to a Belly dance class. It was the start of a revolution for me. I began dancing, going to the gym, running and became vegan in 2012. I am part of a Belly dance Troupe.  I continue to not only lose weight and eat clean, but also encourage others that ALL THINGS ARE POSSIBLE. Today, I am at 229 pounds and still losing.

I’ve been vegetarian for 13 years but went vegan April 2012. When I made that choice, I realized that I became more aware of what I eat. I don’t count calories but I am aware of how foods I eat affect my body. I read up on food and know how food affects the various parts of my body. I shop in the grocery store 3 to 4 times a week. I don’t eat any whites (bread rice sugar). I eat veggies with every meal including breakfast. I eat raw vegan as much as possible. When I go out to eat (very rare) I ask tons of questions about what is in my food. When I go to people’s functions, I typically bring a lunch bag with my favs fruits and veggies. I aim to eat several small meals per day. My shelves and freezer stay empty as I avoid processed foods as much as possible (vegan foods or not processed is processed). 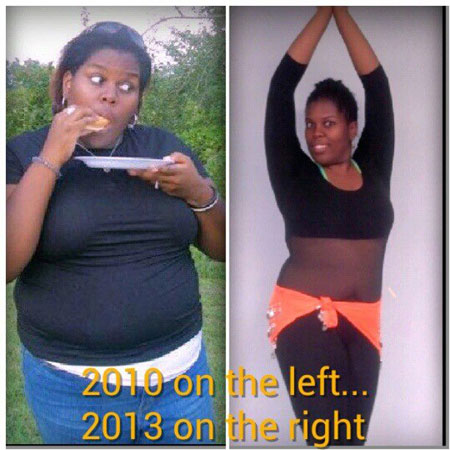