You are here: Home / Before and After Photos / Inspirational Weight Loss Story: Ida lost 142 pounds

While facing a number of issues that many people would have found overwhelming, Ida lost 142 pounds with weight loss surgery.  I think you will find inspiration in her words. She wants us all to know that WE can do anything!  Here is  HER STORY: 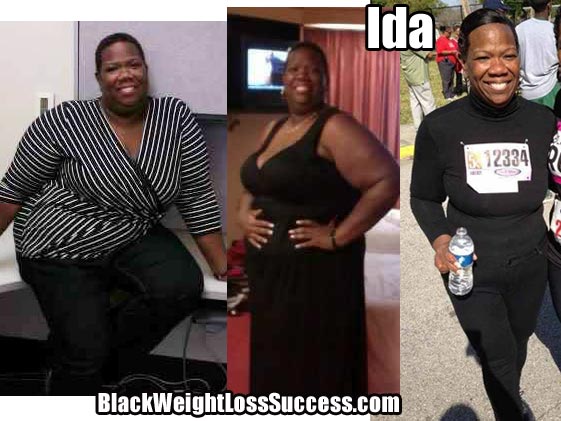 “My name is Ida Henson Starks and I had weight loss surgery on March 13, 2012. When I went to surgery I weighed 302 pouns. Today, 20 months later, I am a healthy 160 pounds. The weight came of easy. The mental aspect has been the toughest. My parents told me if I set my MIND to do something…don’t give up and don’t give in…. I’m a success story.

I have been overweight since I was a child, not fat but larger than other kids my age. I got married at 19 years old and that was when I lost control. I didn’t eat due to depression, anxiety or a health issue. I ate because I simply enjoyed the taste of good food. At 29 years old (I don’t mind sharing this) I was diagnosed HIV positive. I’ve never been sick and instead of allowing the disease to take control of me, I took control of it. I gained weight instead of losing. In 2006, while preparing for a hysterectomy, I found out I was pregnant. I delivered a healthy HIV negative baby boy in August of the same year. I continued to gain. I divorced my third husband in 2010, and it was me and the little one. My ex had a habit of calling me fat but my 3 year old son would find ways to encourage me in his own little way. In 2011 my son started to play flag football. At 42 years old, I was not only one of the oldest mothers but I was also one of the heaviest. He wanted to play basketball, do martial arts and sing in the church choir. I wanted to get something to eat and go to bed after a hard day at work. I made up my mind after the football season ended that since I couldn’t do anything about my age, I would do something about my weight.

After getting clearance from my Primary Care doctor, Infectious Disease doctor and my OBGYN to go forward with surgery, I chose to do the gastric sleeve where 85% of my stomach was removed.  The surgery was done on March 13, 2012. I weighed in that morning at 302 pounds wearing a size 26/28. Now, 20 months later I am a size 10/12 weighing 160 pounds. I have worked out 3 to 4 times a week since surgery. I have completed a 3 mile AIDS walk and a 7 mile prayer walk. I am preparing for a 5 mile walk for the cure of Breast Cancer. I was on 1 medication for HIV, but I was on 5 meds for high blood pressure. I am still on 1 med for HIV but I’m proud to say I have not taken a blood pressure pill in 18 months. There is a lot to my story and surgery for weight loss is just a portion of it.  Someone needs to know that there is life after a diagnosis no matter what the diagnosis might be…and…when you put your mind to it.  My son and I have a saying to encourage each other. OUR saying is, ‘I CAN DO ANYTHING!!’. Thank you for allowing me to share.”