You are here: Home / Healthy Eating / Obesity in Black America

One in 5 people die from weight related illnesses and complications.  In many recent studies, Black Americans have the dubious distinction of having one of the highest rates of obesity in the US according to the Centers for Disease Control (CDC). To be considered obese, you must have a body mass index* of 30 or higher. To be considered morbidly obese your body mass index must only hit the BMI of 35 with health complications, or have been measured at 40 for at least five years. 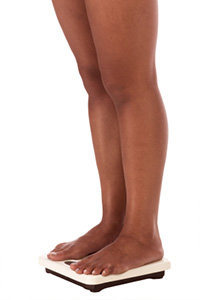 There are many theories of why the Black American community has such high rates of obesity, none of which have been conclusively proven as true. It is generally accepted that the cause is a combination of culture and genetics. Complicating the issue is that Black Americans don’t simply suffer from just a Black American culture that promotes obesity (there’s a debate on that), they are influenced (as all Americans are ) by the general American culture which also promotes a lack of activity and poor diet.  That leads to obesity across ALL racial categories. Here are just some of the major complications that you risk by remaining obese or seriously overweight. Losing weight radically reduces risk of death or health complications from each of these conditions.

I feel that it’s time that we face the health issues below and start to educate ourselves and our communities about the risks and how to turn these trends around!  Let me know what you think in the comments section.  Should we consider the studies that come out a call for action or is it all just more “bad news” about Black People?

Black Americans are prone to type II diabetes, an acquired form of diabetes related to obesity. While this type of diabetes is on the rise in the US across the entire population, it is becoming more prevalent among Black Americans under the age of 25. Diet and exercise that lead to a return to a healthy weight and normal blood sugar levels can quickly remove the need for managing type II diabetes with medication and therapies for many people.

High blood pressure and obesity go hand in hand. While the American culture emphasizes treating high blood pressure with medication, rather than emphasizing prevention – the Black community is at a disadvantage as many of the current medications have not been rigorously examined for their benefits on the genetic profiles of Black adults. While this imbalance in clinical trials is slowly being corrected, thinking you can rely on a medication to control your high blood pressure may not be realistic for everyone.  Having open communication with your doctor and other medical professionals is key to finding the right therapy that works for you.

1 in 5 Americans die from weight related illnesses. Being obese, or even just overweight, can decrease your life span by increasing the strain on your heart and inviting in life threatening conditions that could be avoided. Due to high obesity rates, some Black Americans face shorter lifespans (Some studies show that this increases our mortality rate when compared to other racial groups in the US).

More Black Americans are being diagnosed with weight related illnesses from diabetes to joint pain to pulmonary and breathing disorders than ever before. Excess weight can have an effect on the efficiency of your lungs and other vital organs as well as depressing your immune system and metabolism. It is also thought that being overweight can complicate your recovery from surgeries and other illnesses as fat acts as fast absorbing neutralizer for many medications and antibiotics.

Obesity comes with high blood pressure and is also commonly associated with heart disease and poor cholesterol health. When you combine these elements together, there is a radically increased risk for stroke. Having a stroke can happen at any age. Being obese increases your risk of stroke and can also complicate your recovery from one.

Extra weight increases pressure on your joints and can act to reduce circulation. All of this can combine to an increase in mobility issues and arthritis. In many cases, the normal medications used to relieve arthritis pain are not as effective in patients who are obese as their weight is not taken into account with the dosage. If weight is taken into account, there is a secondary issue of potential toxicity or dependence due to the high medication dose.

Recent studies have conclusively linked belly fat to an increased risk of breast cancer. It isn’t belly fat that is specifically the issue, it is the particular fat cell type called an estrogen receptor cell which is most common in the stomach area. Older studies have long shown a direct link between being obese and an increased risk of the following cancers: esophagus, pancreas, colon and rectum, endometrium, kidney, thyroid and gallbladder.

*Note: I know that many people dispute the validity of BMI in determining health, but it is the measure accepted by the medical profession at this time.  I also realize that the info I’m talking about in this article is based on research and studies that many may not agree with.  Many time the reaction I hear about info like this is that it stereotypes us or that “they” are saying that we are all fat and unhealthy.  My intention is to bring forward some info to make us all think about how obesity and weight-related illness is affecting our community.  We can look around our families, co-workers, friends and the whole of America and see that weight and poor eating is affecting the health of many.  It’s time that we stop dismissing the stats that DO on some level correspond with what we are seeing.  I’m not saying that every study is accurate…but every stat and study is not wrong.

Dr. Tyeese Gaines – How obesity has become a part of black culture

The Office of Minority Health – Obesity and African Americans

US News – Blacks have highest obesity rates in US