Today’s featured weight loss success story: Shae lost 108 pounds.  After battling a number of health issues and weight gain related to the birth control she was taking, this proud mom was able to find a way of eating and working out that worked for her.  Here is what she shared about her weight loss journey: 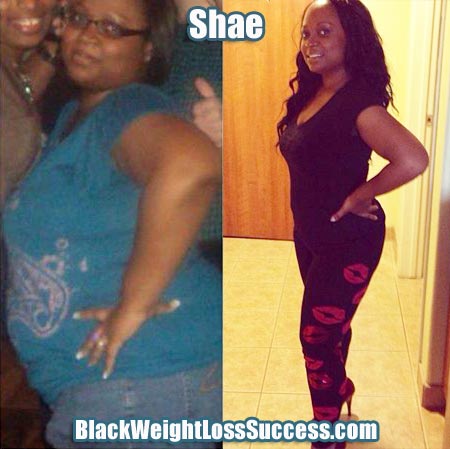 I always was active growing up and never had a weight issue until about a year after my first pregnancy. At that point, I decided to go get on birth control. Well, it was my first time getting on birth control and that’s when the weight began to slowly creep up on me. With this increase in weight, I decided to try several different diets over the course of years and would lose the weight gained but as soon as I returned to eating “normal”, I gained all my weight back plus more. This recurring cycle took place for around 4-5 years. I also had a lot of issues going on within my life and would turn to food for comfort. While I thought it helped me at that moment, I would later realize that it only made life worst for me because I kept gaining more and more weight.

In 2010, I got pregnant with my second child while on birth control and stopped once I found out. Early in 2012, I weaned my second child off of breast feeding and decided to go get back on birth control but I wanted something that was more effective. At the doctor’s office I was told that with my weight being so high, a lot of birth control methods would begin to be less effective a well as leave me with a higher risk of side effects. Regardless of what they told me, I still wanted it. My weight in March 2012 at that doctor’s visit was at an all time high of 250 lbs. I don’t know how many days I cried not really understanding how I could go from being so active to carrying around so much weight on me. I also had arthritis which I had as a child and had under control but since I had gained so much weight, caring for it became much more complex. I thought of ways to lose the weight and discovered MyFitnessPal in which I begin to count calories. For the first couple of days before beginning a new diet, I wrote down what I ate to determine how many calories I was consuming each day. It was between 3000-5000 calories. So I then decided that I was only going to eat between 1800-2000. After counting calories for a week or so, I started to drop a little weight (16 lbs). In early April, I started having issues again in my marriage and started to revert back to old habits. On April 26th , I quit my job and said I’m not going to let this weight control me (I was 234 on this date). I started doing Zumba everyday and would still count my calories but was consuming around 2500 calories. I cut out soda, some sweets, fried foods and whenever I would eat out I would box up some of my food and save it for another day.

From the end of April to August, I was following this same routine but I started having real bad migraines, dizziness, severe pains in my stomach, and a whole lot of health issues. At the end of August, I had only lost 22 lbs which I was happy with but started stressing because my health issues were getting worst. In September 2012, I was rushed to the hospital in severe pain and was told that I had several blood clots in my stomach, liver, and right leg. There also was evidence of a stroke. All this time I was in pain and having these issues, I never went to the ER. The culprit to these health issues was the birth control I was on, so the doctors told me they had to remove it. They had to go in and try to break up the clots but was unsuccessful and I was advised that I would have to be on blood thinners and have to go through so much more therapy. I was so upset with myself because I was told earlier this year about my weight and the birth control. I spent three weeks in the hospital and that was the worst time of my life at that point. The last day there, the doctor advised me of what my daily routine should be and how I really should watch my diet and exercise routine because I’m so young and don’t want to be on this medication long term.

Well, this was it. I was not going to let anything take me from my kids. If I didn’t start taking care of myself, there was no way I was going to be able to take care of my kids effectively. Since the time of release from the hospital, I drunk nothing but unsweet tea and water. I started eating healthier (cutting my portion size in half) and exercising two hours a day doing Zumba and other high intense cardio. What was different about this time was I started to drop weight much easier. I attribute that to not being on birth control. I have not been back on and have no plans to ever get back on it. My life has been so much easier as I don’t have the health issues I had before while on it. By the end of the year, I had dropped around 60 lbs. I kept this routine up and lost an additional 18 lbs earlier this year but have been maintaining my current weight of 142 lbs (+/- 2 or 3 lbs) for three or four months now. I now know that this is a lifestyle change and I know the steps to take to lose weight and keep it off. I am so glad I’m starting to get my happiness back. The advice that I have for others is to stop living for others and start living for you. There’s no way you can be there for someone else, if you’re not in your healthiest state.