You are here: Home / Before and After Photos / Tameka lost 129 pounds

Weight Loss Story of the Day: Tameka lost 129 pounds.  This proud mom of 2 lost the weight after creating her own custom weight loss plan by combining all the things she knew how to lose the pounds.  Here is what she shared with us about her weight loss journey:

Hi, my name is Tameka. I started putting on weight after I had my first kid, right out of high school. I gained 70 lbs with the first pregnancy and 50 lbs with the second. At the age of 27, I weighed 205 pounds and was telling myself that it was baby weight. Even though my youngest child was now 8 yrs old, I was using my kids as an excuse for being overweight. After falling in love and getting married, I gained almost 100 lbs. I tried several times during the course of my life to lose weight and just could not. I just was not happy with how I looked and felt. During the course of of my marriage me trying to lose weight even caused arguments between me and my husband. In 2010, after 2 yrs of being married, we called it quits.  I filed for divorce and began my weight loss journey.

In Aug 2010, I weighed in at 297 pounds. I started going to Weight Watchers and began to work out with my sister Mesha. I felt confident after the first week, telling everyone I was gonna do it FINALLY lose all that weight. Well, I actually got laughed at by my sisters. They would say things like, “YEAH RIGHT WE HAVE ALL HEARD THAT ONE BEFORE”. Thanks to them, that really motivated me to not only prove them wrong but prove to myself that I can do. After a month, I decided stop going to Weight Watchers and do it on my own. I blended together all the things that I have learned about losing weight. Took everything I learned from all the diets I have tried. Put it all in to action. I still ate the Weight Watchers meals. I worked out and I would make sure on every 3rd day I would have a LOAD UP DAY. Which really helped alot. That day was dedicated to eating a whole pizza if I chose to. I also worked out 5 times a week. I found that working out before I actually went to work really helped. Morning workouts gave me the energy I need to get through the day.  Also when you get off work you are toooo tired to go workout and more likely to just go home.

More than 3 years later and I have maintained my 129 lbs weight loss.  I now weigh 168 lbs. I changed my eating habits completely. I slowed down on the fried foods. Only on load up days would I have it. I started eating 6 small meals a day. (Ex: 7am breakfast, snack at 10am, lunch at noon, snack at 3pm, dinner at 6pm and very light snack at 8 pm) I ate foods that were high in fiber to help with the hunger and desire to eat. I aso became an pescatarian (Which is practically a vegetarian but I do eat seafood). When working out I do 45 mins of cardio (Cycle class or Cardio machines) and 15 mins strength training (loose weights). 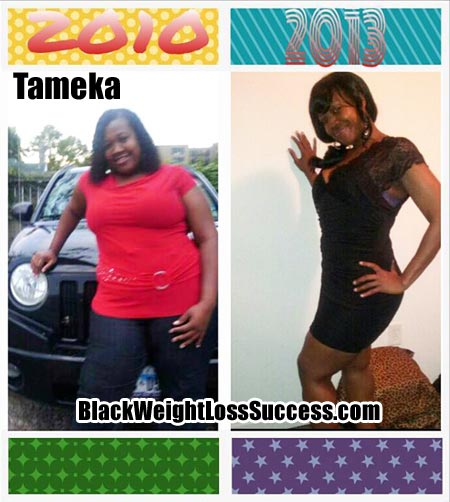