You are here: Home / weight loss / Why Does Weight Loss Seem Easier For Men? 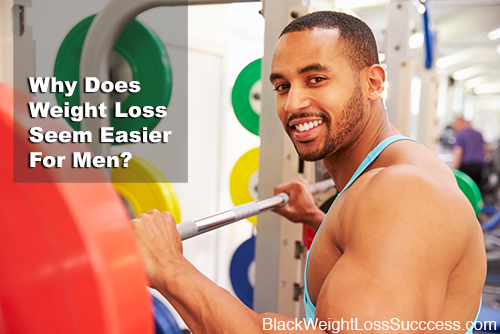 In a world where many men and women are struggling with weight loss, why does it seem like weight loss is easier for men? Are they more inclined to exercise? Is it easier for them to say no to unhealthy foods? Is their metabolism faster? If you’re on the weight loss journey and have been wondering about this, it’s time to get to the bottom of the matter. The reality is that losing weight is hard for men and women, but let’s take a look at this theory and delve into the topic a bit further.

The topic of how often men and women think about food was put out there in a survey recently that looked at thoughts of food and sex in society. The result? Women tend to think about food much more often than men. In fact, the poll indicated that women think more about food than sex, but men tend to think more about sex than food.[1]  With women thinking more about food, they most likely eat more frequently than men, thus, it may be tougher for women to lose weight if they are eating more calories than their male counterparts.  Also, women are under tremendous pressure when it comes to cooking meals, buying groceries and losing weight. There is a lot of energy in our society focused around women and food vs. men and food.  Just take a moment to think about how much you discuss food, eating habits, dieting, etc with other women.

If you’re a woman, you or one of your female friends have probably soothed a broken heart with chocolate,  ice cream or your comfort food of choice at least once. You’ve probably also seen plenty of movies where women are drowning their sorrows in desserts. Yes, women tend to relate emotionally to food, while men don’t do this as much (the do, but not as frequently). A study was conducted in which both men and women fasted for a day and then were shown pictures of delicious foods and were told to continue fasting. The results showed that a woman’s brain was much more active than the man’s in the emotional regulation area, indicating that a man can sort of shut off their emotional connection with food easier than women.

“In men, this willful inhibition directly affected brain metabolism—the group suppressing their craving had less activation in the limbic and paralimbic regions, which control awareness of hunger and desire for food. The two groups of women, in contrast, had equivalent brain activity. This observation corresponds to the participants’ ex­perience: the men who tried to ignore their craving felt a decreased desire for the food, but the women were tantalized despite their efforts at self-control. Wang also reported that the women’s brains showed a much greater response to their favorite food than men’s did, and he speculates that these findings may help explain why so many women struggle with their weight.” – Scientific American

Men, typically, do have faster metabolism

Yes, it’s true. Men tend to have faster metabolism than women, with research indicating that it can be up to 10 percent higher, helping them lose and keep off weight easier than women. [2] This has a lot to do with muscle mass/lean tissue.

Research shows that men have more lean muscle tissue over women, which burns a lot more calories than body fat, even at rest. Although it is important to keep in mind that the advantage is only short-term, because studies have revealed that over the long haul, women do end up losing the same amount of weight as men. [3] Men may also lose weight a bit faster, but they can put it right back on within a short period of time, just like women.

Guys can thank their testosterone levels for giving a bit of an advantage when it comes to weight loss. With their testosterone levels being naturally higher than woman, and their lack of estrogen, they’ve certainly got an edge when it comes to weight loss. In fact, women are between 6 and 10 percent higher in body fat due to estrogen, which can make it a bit tougher for them to lose weight in comparison. [4]

Good news is that it is possible to lose weight whether you are a male or female, as these differences aren’t really all that much of a difference.  If you make a commitment to regular exercise and adopt a healthy eating lifestyle, you’re apt to lose weight regardless of gender.  Getting more health conscious certainly goes a long way when it comes to mind, body, and spirit, so if you’re on the weight loss journey,  continue learning ways you can trim down and become healthier and don’t forget to enjoy the journey.  (More info on good nutrition guidelines for men and women).