You are here: Home / Before and After Photos / Catrice lost over 120 pounds

Today’s weight loss success story: Catrice lost over 120 pounds and now she helps other to reach their fitness and weight loss goals.  Here is what she shared with us about her weight loss story: 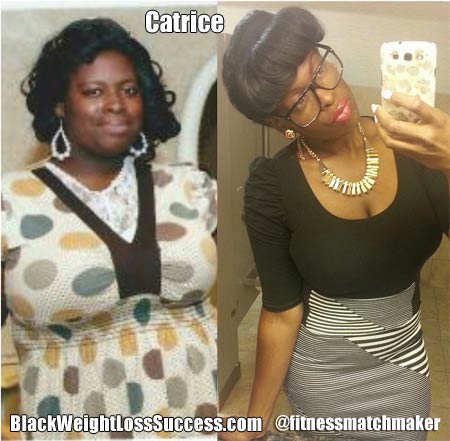 “Catrice’s weight battle began at the early part of life and continued until her teenage years. Food was and has always been a very intricate part of her upbringing and overall culture. Although growing up in a community where diversity was a part of everyday life, Catrice still managed to adopt the culture of overindulging in food due to lack of knowledge and resources in her home.

Celebrations that most Americans participate in became excuses for family and friends to over indulge in unhealthy and fatty foods. With a mixture of family celebrations, birthday parties get together and church functions, the pounds packed on, and the self-esteem and self-confidence and Catrice’s overall self-identity declined. The battle of weight loss began during the early teenage years, the on again off again workouts and the desperate challenge of attempting to lose weight became the norm. After high school and no success of weight loss in sight, Catrice often found herself giving into temptation and the pounds packed on in a major way.

Like most overweight individuals, Catrice attempted different ways to lose weight; some methods that she used would be considered life threatening by health professionals past and present day. As a teenager, Catrice did everything from borderline starvation, utilizing women’s laxatives from the dollar store to even bulimia. From time to time, a workout was thrown in by wearing sweats and a trash bag to sweat the fat off of her body; “this method will surely work because effort was put in to this workout” she often hoped. It seemed like all hope was diminished as she found herself embracing her new found size and weight. At the age of 17, Catrice graduated from High School and weighed 235 pounds. Soon Catrice found herself drinking, partying, smoking cigarettes and over indulging in extremely fatty foods. Because of the area that she hung out in, the newly legal young lady found herself in a bottomless pit of being well overweight and dangerously depressed. The pounds packed on.

Her need for a positive change was apparent in her behavior and was needed to even save her life. While working as a supervisor of an Assisted Living Community, one of Catrice’s co-workers suggested that she attend a local gym with her before work one day. Fascinated of the idea, Catrice obliged only to hit the scale to discover that her weight went from a manageable 238 to a whopping 310. Depressed at the mere thought of this weight, Catrice began to join and attend the gym a few days a week and change her diet (Which would be the biggest challenge of them all). By tackling this task she would have to change her diet, count calories and adopt a new workout routine; all of this is was completely new for her because of never playing any sports in school.  Her initial goal; lose 15 pounds.  Catrice stuck with her workouts, eating schedule and regimen and in the first few months of working out she lost 20 pounds. Present day, Catrice has lost over 120 pounds! Catrice has become your average Gym Rat with no plans of stopping in sight. In addition, she is the Founder and CEO of The Fitness Matchmaker and the Weekend Workout Mentoring Program, this program assist newcomers of the fitness & weight loss scene to feel free and comfortable about the weight loss process. Catrice prides herself on being a enthusiasts of fitness and one who enjoys seeing others achieved their desired fitness goals.

With her network of fitness professionals, gym affiliates and amazing personal trainers, Catrice is dedicated to assisting those who are looking for the perfect “Fitness match” for you! The Weekend Workout Mentoring Program also is a grassroots program that encourages one to get started in the process,  empowers those who are determined to stick with it and uplift those who may have fallen away to get back on track. Catrice works as an avid fitness enthusiast in and outside of her  gym to assist newcomers to weight loss in staying focused on their desired fitness endeavors and not to lose sight even if they don’t see tangible weight loss within their desired time frame.

Although she has lost over 120 pounds, Catrice is currently working on losing additional weight and building lean muscle. Look out for progression pictures in the future!!!”