You are here: Home / Before and After Photos / Felicia lost 55 pounds

Today’s featured story: Proud Navy wife and mom Felicia lost 55 pounds.  She provided lots of detail about her weight loss journey and how she transformed her weight and health. Check out her story below: 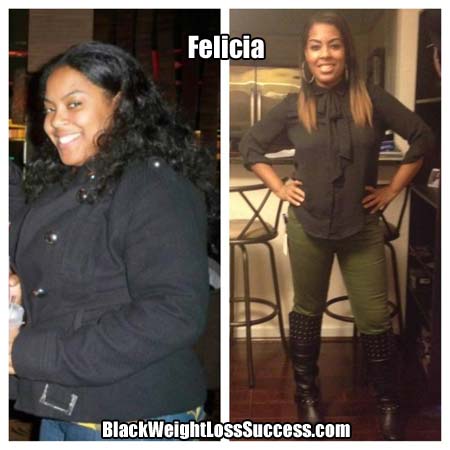 “Summer of 2010 the majority of my mornings I would wake up feeling extremely sluggish & as the day would progress I would still have little to no energy. I am a very outgoing person with an abundance of personality (or so I’d like to think lol) and this sluggish mood just did not fit who I was. I remember being in Chicago for an annual taste fest and while preparing for the day in my hotel room with my family, I noticed there was a scale in the hotels bathroom. I decided to step on it for the heck of it and BOOM there it was. 208 pounds. I was shocked. So, shocked that it basically knocked the wind out of me. This is what opened my eyes to what I have been so blind to. Before I left Chicago to return home, I stepped on the scale again for it to read 206 lbs. Losing the two pounds in two days sparked a little motivation.

My husband was set to leave for bootcamp in September of 2010 for the United States Navy so I used this to set a weight loss goal. By the end of the two months he was gone, I wanted to lose 20lbs which I felt was a sensible goal. When he left I was 197 pounds. Fortunate enough for me, I worked at a company that had a fitness facility which made it easy for me to get a workout in everyday durning lunch. Along with the workout I started watching my portions and attempting to count my calories with an app I downloaded called Lose It. Even though I was not being completely honest with the app in what I was consuming as far as calories for the day, I still managed to lose 17 lbs by the end of my husbands bootcamp graduation!!! I was excited to show my husband I did it! After bootcamp is when things got a little crazy. I was under a lot of stress with leaving my career behind due to military orders for my husbands training and uprooting myself and our two kids from our home back in Michigan to Great Lakes, IL so needless to say, working out and counting calories was the last thing I was concerned about. After relocating to Great Lakes Jan. 1st 2011, I decided to pickup where I had left off with the weight loss kick since I was now a housewife and nothing better to do. I currently weighed 186 pounds and this is when I started the Insanity program by Beachbody. I was terrified as I knew I probably couldn’t perform over half of the moves. Heck, I couldn’t even do half of a push up without slamming face first into the floor! But even knowing all of this, I jumped into it, minus the diet. By the end of the sixty day program, I could do push-ups, push up jacks, walking push ups gained a lot of muscle lost about six inches off my waist but I only lost about 5 pounds. What a disappointment. My husband on the other hand was beyond impressed on my new fitness level so that was enough for me to chuck up the sad feeling of not losing as much weight as I would have like. After Insanity, I did TurboFire just to keep active but as far as weight loss, nothing. But I was maintaining so I was ok with that. By November 2011, we received orders to Naval station Norfolk in Virginia but this time I made a promise not to go backwards with the success I’ve had thus far with maintaing my weight loss.

After being in Virginia for just a few days, I knew that I no longer wanted to be a housewife and I really wanted Adult company/friends for when my husband would be out to sea. Virginia was so far away from home & I needed to find people to lean on. I found a great company and was hired just a few weeks after submitting my application. I met great people and made a few close friends. One dear friend of mine I became extremely close with and we got a long so well at work and outside of work and we honestly could not get enough of each other. We would drink wine every night afterwork and cook dinners every night like you thought it was thanksgiving everyday but life was good, I was back in touch with my adult self and I loved every glass of wine and every delicious meal that I consumed. And so did my belly. Ugh! I gained everything I had loss back plus some! I was now 197 pounds as of June 2012 and I was just over it. And again, I jumped back into attempting to workout and count calories and by November 2012 I was back down to 183 lbs. I maintained up until July of 2013. My husband was leaving for what would be our first deployment (9months) & I needed to be sure I could keep up with our children! I woke up one day and just looked at myself in the mirror and said to myself, is this it? Is 183 pounds really where I want to be? Hecks no! The first thing I did to jump start my new found motivation, I bought a book called SHRED by Dr. Ian to teach me what I had not applied in the past and that was what when and how to eat. I then signed up for my first 5K race and ran it on July the 4th. By the end of my first week of dieting and exercising, I was down 7lbs. Right then is when I knew I was reborn. I had real results and the feeling of that seven pound accomplishment was enough. I set a goal to just get under 178lbs because I had never seen anything less in my adult life.

Today, I am down to 153 pounds and still going!!! I count calories, still using my Lose It app and I exercise during my lunch break Monday – Friday anywhere between 30-45 mins. On Saturdays I run 3 miles and 1 mile uphill and on Sundays I rest. I have never been so happy in my life, I can keep up with my kids and I love knowing that I inspire others. My husband has been out to sea for the last 5 months and while he knows I’ve been working out, he has NO idea of what I look like today!

My advice to people trying to accomplish this same goal is to celebrate all small victories. Set small goals first. If you only lose 3-4 ounces, so what! You lost it!!! Celebrate. Don’t quit because you have a bad day with food, tomorrow is a new day. You can’t get fat off one bad meal just like you can’t get skinny off one healthy meal. It takes time. Follow me on my journey if you wish @she_did_that313 on Instagram” 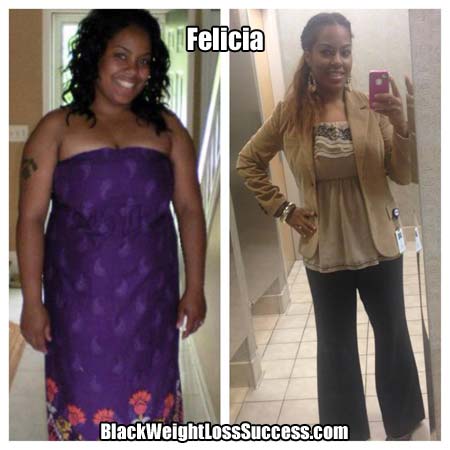