You are here: Home / Before and After Photos / Tai lost 105 pounds

Today’s featured weight loss before and after: Tai lost 105 pounds by doing the work of working out hard and changing her eating habits to lose pounds.  She has provided a LOT of detail for us. Here is what she shared with us: 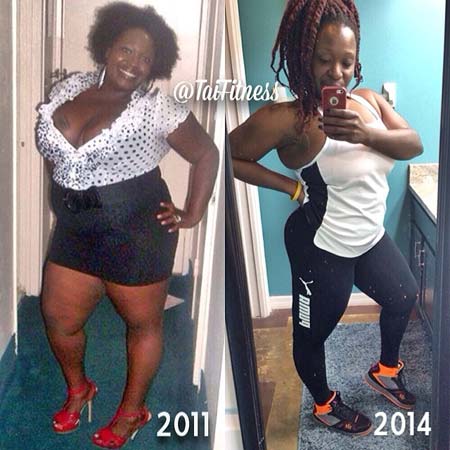 “Good morning, I just wanted to give my personal thanks to you for promoting wellness, especially in our community. I’ve been on a healthy journey myself the last 15 months going from 265 to 160! It has inspired me to share my journey as a means to help others like me know it is possible to change your life. This is a really awesome page & I’m glad my friends told me to check it out. Thanks again for your contribution towards healthy living & Showing good examples for women to follow!

On July 5th, 2011, I removed my rose colored glasses and realized an ugly truth I had been hiding from for years: I was extremely overweight and unhealthy. It was during a weekend trip to Miami with friends, and it was the first time I felt uncomfortable in my own body. I had been overweight for the better part of my life, and had become numb to cruel taunts and overweight remarks; however, this weekend was different. If you’ve ever been to south beach, you know that it’s a scenery of nicely composed bodies flaunting them proudly up and down the main strip and boardwalk. 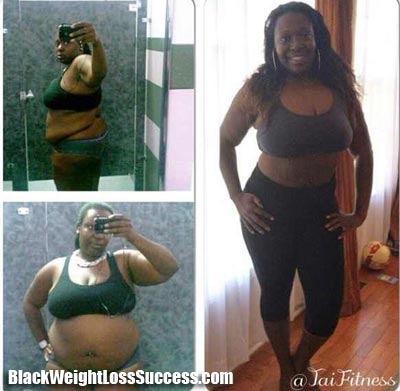 Upon returning home from vacation I decided I needed to do something about my weight. I was about 265 pounds and standing only five feet tall. At the time I was a year and a half from my 30th birthday, and I didn’t want to enter the next year of my existence with the unwanted weight. Further, I knew that it would be harder to lose the older I became. I started by joining a Biggest Loser completion at my office. It helped to keep me motivated in the beginning because I’m very competitive and there was money involved for the top two losers. I ended up coming in second place after losing 17 pounds in eight weeks; however, after a few months of working out I hit a plateau and became very discouraged. I was around 30 pounds lost when I decided to change gears and stop working out at the gym. I instead took to a female dance studio that hosted classes like Zumba, Belly and Pole Dancing. I looked like a fish out of water participating, but I kept at it. What I liked most about the studio is that there were women of all ages and sizes, and they pushed me to do better. I kept up with the classes for about two months and then decided to start working out at home to save money. I took to walking and the intense Insanity workout. This forever changed my life. The program was tough, but I pushed play every day because I knew that if I did I would get results. Eventually my daily one mile walk turned into a two mile jog and increased to running several miles later down the line. I finished two rounds of Insanity and then moved on to another home program called TurboFire. The convenience of working out at home helped me stay on track because all I had to do was walk into my living room, which gave me no excuse as to why I couldn’t work out.

What was most beneficial for me during the entire process was learning how to eat properly. In the beginning, I stuck to a 1200 calorie diet, but found that I was consistently hungry. After a while I stopped losing weight, and after doing some research I found out I wasn’t eating enough calories to sustain my weight loss. I also started to look into the actual foods I was eating. I eat a lot of processed foods like canned soup, frozen meals and boxed foods. I learned to adapt to a method of clean eating instead. It wasn’t easy; it took about 6 months of researching and trying new foods before I became fully versed in what clean eating was. The benefit of it verses my previous diet regiment was that most of the food was only lean cuts of meat, raw fruits and vegetables, eggs, fish, nuts and seeds. I started to try at least one new food item each week until I replaced most of the bad foods I had previously consumed on a regular bases.

It took 14 months, but I to date have lost about 105 pounds. My current workouts are now back in the gym lifting weights as I am down to 160 pounds and looking to gain more muscle mass. I also run daily, anywhere from three to six miles, and I’ve taken up yoga. The results I received along the way certainly helped me to stay focused. Also, the people I encouraged along the way by sharing my struggle was a major motivator. I used social media sites like My Fitness Pal, Instagram and my Facebook page to share my store and have others share theirs. Providing motivation to others and helping them see that accomplishing their goals has been one of the most rewarding benefits of this whole process. This is because when I was at my highest weight there were not many women who were where I was and had gotten to a point I was trying to achieve. This is the main reason why I find it so important to motivate women who are currently the “old me” looking to achieve their own health and fitness goals.” 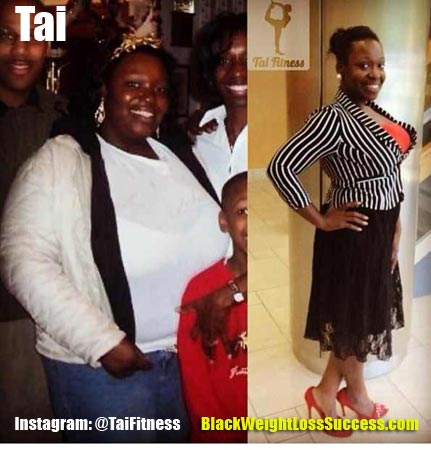