You are here: Home / Before and After Photos / Ashli lost 116 pounds

Today’s featured weight loss before & after story:  Ashli lost 116 pounds over the course of 4 years by changing her eating habits, working out and watching her calorie intake.  Here is what she had to say:

My name is Ashli T. I have struggled with weight my entire life. I was a 10lb baby and by the age of 8 I was litterally 207 pounds. I had always said that I would not be that overweight forever. In 2008, my father passed away of a sudden heart attack. He was seemingly healthy, active and not at all overweight.  It began to scare me so I decided I wanted to do something.  After several attempts, I finnally buckled down around April of 2009 and I am still at it today.  I began to eat between 1200 calories to a max of 1500 calories per day while trying to burn at least 1000 calories.  At my “best” I do this 5-6 days a week and at my “off the wagon” times at least 2-3 days a week. I’ve had incredible results and incredible defeats.  I have plateaued and I have pressed harder. I would never say it was or is easy, but its the best decision I have ever made! I’ve lost 116 pounds.  The process has been over the course of four years..and it will last a lifetime! I often say if I can do it, anyone can! 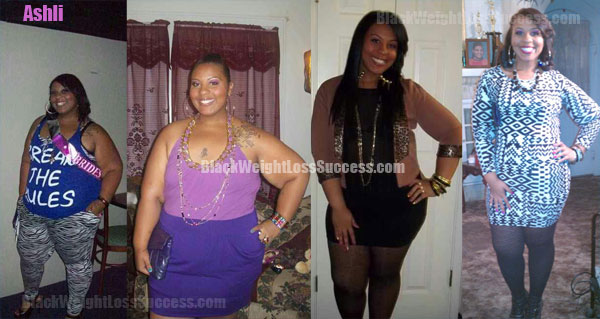