You are here: Home / Before and After Photos / Donesha lost 81 pounds

Today’s featured weight loss success story: Donesha lost 81 pounds.  She has shared a great amount of detail about her weight loss journey and talks about how family illness impacted her decision to get healthy.  Her is what she had to say: 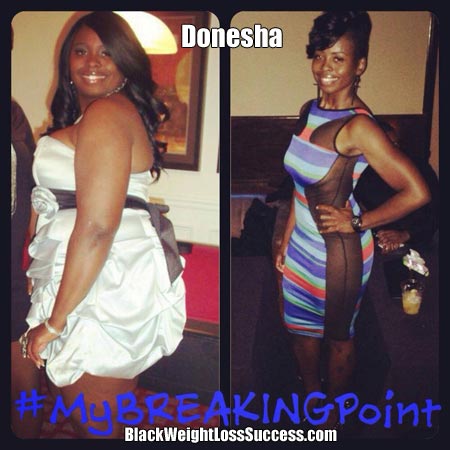 My name is Donesha Bolden and I am a 33 year old educator in Atlanta, Georgia. I was born and raised in Newark, New Jersey and later moved to Alabama where I finished high school. I attended Alabama State University for 1 &1/2 years and later transferred to Troy University (Dothan Campus) where I graduated with a Bachelors of Science degree in Elementary Education.

I relocated to North Carolina and started my first teaching job. I was very comfortable living in North Carolina until my mother was diagnosed with cancer and was given a time frame to live. At the time I was attending North Carolina Central University working on my Master’s degree in Curriculum and Instruction so I would travel over 600 miles back and forth to help my family care for my mother.

Life was hard but I was making the best of a bad situation. I had joined the local YMCA and started taking part in Zumba and high impact aerobic classes. I started gradually losing weight. I was weighing 220 pounds and I had gotten down to 190 pounds. Nutrition was not a part of my workout plan at the time and I was just kind of going through the motions. My plans were to finish school and move to Atlanta so that I could be closer to my mother but she didn’t live long enough for that to happen.

A year after my mother passed I made the move to Atlanta without a job or any prospects. I was living with my aunt in Alabama and spending nights with my best friend in Atlanta when I was able to search for a job. I was away from the gym all summer and didn’t take notice to the fact that I was gaining all of the weight I had worked so hard to get rid of. I would eat out most of the time because I wasn’t in one place long enough to try to prepare a meal. Life had gotten to me and it was getting the best of my health.

School had started in Atlanta and I still didn’t have a job but that didn’t stop me. I had a nephew to care for so there was no such thing as quitting! I had been raising Nehemiah since he was 5 years old. A week after school started I was asked to interview for a job in Bankhead and I was hired. At that point I was weighing 215 pounds and so much into fashion that I didn’t see my weight climbing out of control. I would dress for my size and never really paid much attention to how out of shape I was until my nephew wanted me to be active with him outside and I struggled with that task. I was wearing 5 inch heels daily to work and later had severe knee and back problems.

At the age of 37 my cousin was found dead in her bed one morning by her 3 children and two days later my grandfather lost his battle with prostate cancer. It was a year later that my aunt found out that her daughter had died from hypertension. When I was working on my undergraduate degree my uncle fell dead in church of a heart attack. Last year my cousin age 36 started her battle with breast cancer and WON but my aunt lost her battle to lung cancer. Several of my aunts have diabetes and or high blood pressure as well as my younger sister and at that point I decided that enough was enough!

My coworker placed a flyer in my box that gave educators a special on joining her sister Tissilli Rogers IFBB Pro Boot Camp and that was the turning point of my life. I was located in Decatur at the time but I worked all day in Atlanta, drove home, cared for my nephew and then drove back to Atlanta to train with Tiss. My nephew was my motivation and support because he would attend all of the workout sessions with me weekly. I was HALFWAY determined to lose the weight but I was not fully committed to the lifestyle.

I was attending the workouts but I was not changing my lifestyle outside of the gym as Tiss had suggested. I would lose 3 pounds here and 5 pounds there but it wasn’t consistent. Thinking about the illnesses that had attacked my family and wanting to be around to raise my nephew I started to get serious about training with Tiss. In October 2011 I allowed Tiss to take the most embarrassing photos of me and place me on her detox. I felt bad when I saw the photos of how I looked when she was assessing me and knew that it was time to “Train 4 My LIFE!”

I gave Tiss 110% inside the gym and decided to start doing insanity outside of the gym. I completed the insanity 60 day program & worked with Tiss at the same time and I lost 30 pounds. I was really feeling great about myself but I had set a goal of 160 pounds and I wasn’t there just yet. Tiss set a weight goal of 150 for me, ten pounds lighter than my goal.

There were days that I wanted to give up but I focused on why I started and that kept me going. The only piece I was missing was the nutrition and I was stubborn and didn’t want to change my diet at all. I was working overtime on my cardio and I was getting results but I knew that if I wanted real results I had to change the way I was eating. I learned the hard way that you can’t out exercise a bad diet. I started following meal plans designed by Tiss especially for me and I started to see RESULTS!! My family as well as my coworkers was excited about my accomplishments.

I was still focused on the goal that I had set for myself so I kept working. In November of 2012 I reached my goal of 160 pounds & on March 6, 2013 I achieved my trainer’s goal for me of 150 pounds. Today I am 139 pounds and enjoying LIFE!! I have honestly never felt better and I wouldn’t trade this feeling for anything in the world.

My newfound love is running and I look forward to participating in local races soon. I work out every morning Mon-Fri at 5:30 am, after work on Mon, Wed & Fri on my own. I train with Tiss’s Show Ready group on Tue/Thur. I am trying new healthy dishes every day and working to eat clean 90% of the time.

I truly LOVE working out & I love encouraging others though my Facebook & Instagram: @training4mylife People have really connected with me through instagram and want to know how I can help them start their journey. Obesity is a deadly disease on the rise and if I can prevent it by sharing my journey then I do that proudly. I don’t have time to exercise I MAKE time to exercise. It’s a pleasure to see people write me & say that I inspired them to make that healthy change! I figure this is just the beginning and I’m ready for the things to come. I hope my story inspires someone & encourages them to stay on track!