You are here: Home / Before and After Photos / Gwandos lost 77 pounds

Featured weight loss success story: Gwandos lost 77 pounds. She wrote to us to give inspiration to the over 50 ladies (She turns 60 in Oct).  She lost weight by changing her eating, doing Weight Watchers and joining Black Girls Run.  Here is what she shared with us:

I have seen many motivating stories on your Facebook site of Black women being successful at losing weight, but none featuring us “older” ladies. I am 59 years old and I’ll be turning 60 on October 27th.  I have lost 77.6 pounds since January 2011.

My motivation to lose weight came when my son informed me that he had proposed to his fiancé and they were planning a June wedding. Yikes! I knew I didn’t want to waddle down the aisle as the mother of the groom, but I only had 6 months to get it together as they were planning a June 2011 wedding! My focus shifted and I began to be serious about my weight loss efforts.

I re-joined Weight Watchers for the “umpteenth” time on January 18, 2011 weighing 267 pounds, as I had convinced myself that I was ready this time. After yo- yoing on the program, doing My version of it, and losing 25 pounds, I had become stagnant and satisfied with where I was in my weight loss and began to regain some of the weight I had lost. As a member of Weight Watchers I learned to eliminate sugary soft drinks and processed foods and learned to eat healthy by eating fresh fruits, vegetables and lean protein. I joined a boot camp class at my neighborhood gym where I was introduced to strength training. The weight started coming off consistently. I became hooked on working out! A few months ago a friend introduced me to my local BGR chapter (Black Girls Run!) where I met an incredible group of women sharing similar goals, and I began walking. I am now run/walking and have completed more than ten (10) 5Ks. My goal is to complete a half marathon soon. Fitness has become an important part of who I am and what I do. Having learned the essentials of changing my eating habits and incorporating fitness into my life daily, I have lost 77.6 pounds and am close to my desired goal weight of 180 pounds.

As I approach my 60th birthday this October, this grandmother has no plans to slow down! There’s no stopping me! 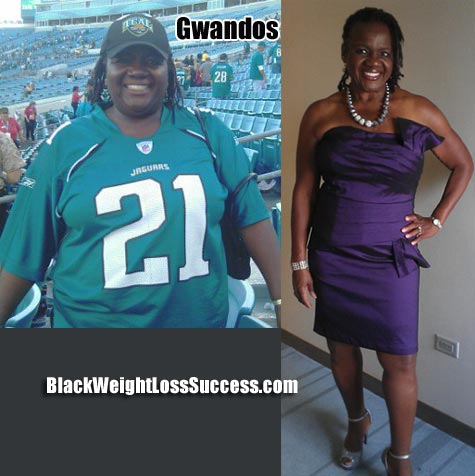