You are here: Home / Before and After Photos / Lyncoya lost 60 pounds

Today’s weight loss success story: Lyncoya lost 60 pounds in about 10 months.  This proud mom and grandmother of 1 found a weight loss program that worked for her and taught her how to change her eating habits.  Here is what she shared with us:

“My name is Lyncoya Terrell. I’m a 38 year old married mother of 3 and grandmother of 1. I absolutely HATED seeing myself in the mirror. I hated the image. I’ve lost a total of 60lbs primarily using Weight Watchers™, in about a 10 month’s time. I have NEVER been that heavy in my life. I have a little ways to go, but I feel great about how far I’ve come. I’m also confident that I’ll keep the weight off this time because of HOW I lost it. It just feels good to be back to the old me.

As far as my eating habits are concerned, I used to fry EVERYTHING before I lost the weight. I’m not going to say that I don’t fry foods anymore, but I don’t fry them nearly as often. Maybe once every two weeks, versus 2-3 times a week. I began to stop eating subs and wings for lunch and began eatings salads, chicken, and fish for lunch. I stopped drinking soda. I don’t LOVE water, so I drink lots of Crystal Lite.  Basically, more vegetables, less rice, potatoes and bread. I stopped drinking alcohol as much. Alcohol has a TON of hidden calories that we are not always aware of. I’ll only drink it socially now, which isn’t often.

When I began my journey, I joined a gym for the first time in my life! I was terrified, but it jumpstarted my weight loss. I did an hour a day 4 times a week. I will admit that I haven’t been to the gym in more than 8 months. I’m working on getting myself back though. In my absence from the gym, I’m still losing though thanks to Weight Watchers™ and the fact that I’ve learned to change my lifestyle! (the first three photos are “BEFORE” and the last photo is “AFTER”) Thanks so so so so much for your response! Your page has been an inspiration to me throughout my journey and to be featured on your page would be awesome.” 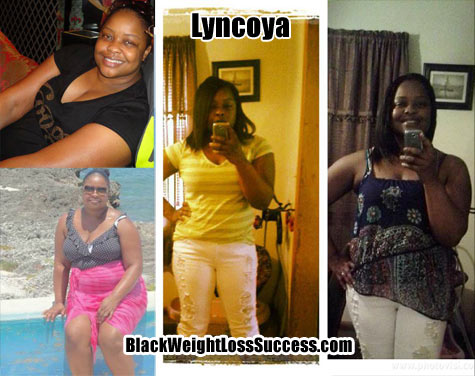