You are here: Home / Before and After Photos / Lindeshia lost 73 pounds

This was one of my favorite dresses! So sad to see it go, But it’s going with great cause… ITS TOO BIGGG!! I love the journey that im on! For those of you whom has ever doubted Tekeema Blackwell Parson’s 6 week Slimdown program… Try it, it works!! No surgeries, no slim quick to get rich plans…. Just cleaning up bad eating and getting the accurate amount of exercise! I’ve been in the program a little less than a year and I am almost down 100 lbs! And I feel absolutely amazing!! So as always, I’m my own #wcw. #slimdownnation #sd4578 #winning

Transformation of the Day: Lindeshia lost 73 pounds. This mom wanted to avoid the family history of hypertension that took her mother away when she was at an early age. She also was too close for comfort to weighing 400 pounds. With the help of a good training program, a green smoothie cleanse and lots of exercise she’s been able to release that pounds. Check out what she shared with us about her journey. 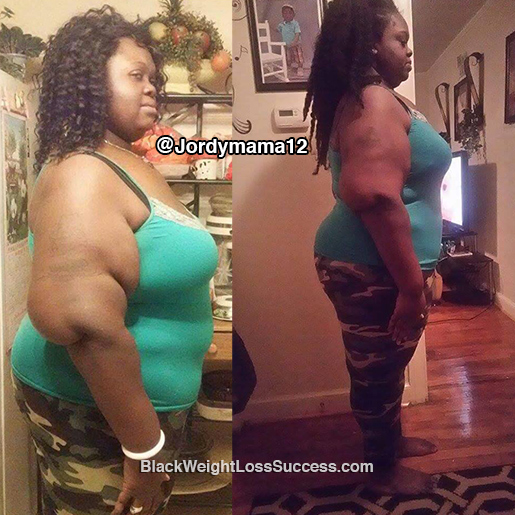 My name is Lindeshia B. and I’m from Kinston, NC. I started this weight loss journey back in October of 2015 after reality set in that I weighed nearly 400 lbs. I weighed in at 372 pounds at the time at 5’7″ tall. I started to notice how much of a strain it was to perform my daily assignments, as well as run behind my three year old. I became frustrated and with prolonged frustration came depression.

One day, I had a vent session with one of my co-workers, LeeAnn, and she told me that her niece was teaching a zumba class. I was skeptical, but without hesitation I showed up that night for class. This is where I reconnected with Tekeema Blackwell Parson (shouts out to her and the Sassys crew!) I had already known her previously, but never experienced one of her classes. That night, I thought that I would die, but I never quit! After class, we had the opportunity to talk and she gave me information about her Slimdown programs. At that moment, I was desperate.

I started working with her program in November 2015. At that time, I weighed in at 367 pounds. The program required 2 rounds of JJ Smith’s 10 day green smoothie cleanse and 5 hours of exercise each week. With tears, hungriness (lol), and a few minor setbacks, I pushed through. I was attending Zumba classes on the regular with an additional hour of gym time daily. I ended the Slimdown in December at 324 pounds. That’s 43 lb in 5weeks! Ecstatic about my results, I joined the next Slimdown which started in January and has just ended that program as of 2/15/16. I am proud to say that I now weigh 298.6 pounds!! I’ve lost 73 lbs in twelve weeks and I couldn’t be happier!

I changed my eating habits by doing away with fast foods, which was my weakness. I started drinking plenty of water and sometimes substituting a meal or two with a green smoothie. I stopped consuming sugars and bread. I began eating eggs, grilled chicken, salads with crunchy vegetables and light dressing, and apples with peanut butter when I craved sweets.

My motivation during this journey has most definitely been my son. I wanted to lose weight because of the possibility of extending my life span so that I can be here to raise my son. I have a family history of hypertension which has mostly been caused by obesity. Losing my mother at an early age from undetected hypertension makes me more than afraid. I couldn’t dare imagine having to leave my son. My advice to anyone starting their own personal journey is to do it for you and yours. If you are not happy with what you see, change it! When you get tired of being sick and tired there isn’t a thing in this world that can stop you. This is only my beginning! So much more to come. 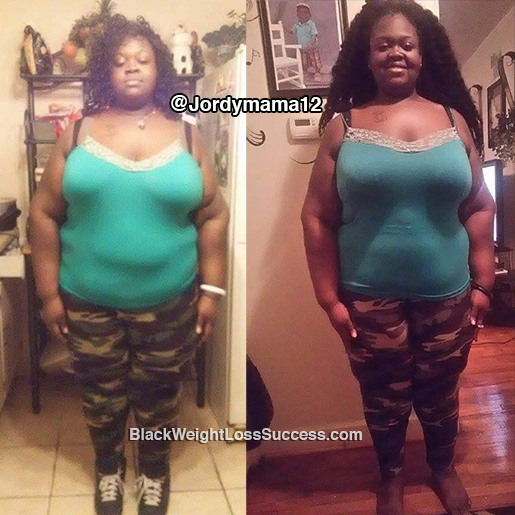