You are here: Home / Before and After Photos / Annie lost 97 pounds

Transformation of the Day: Annie lost 97 pounds and has kept it off for 3 years. She knows that “If hunger is not the problem, then food is not the answer.” Her freedom came from working to heal from the root of her weight gain, sexual assault in her teens. Once she took that step, she was able to take action via changing her eating habits and exercising. Check out her emotional weight loss journey… 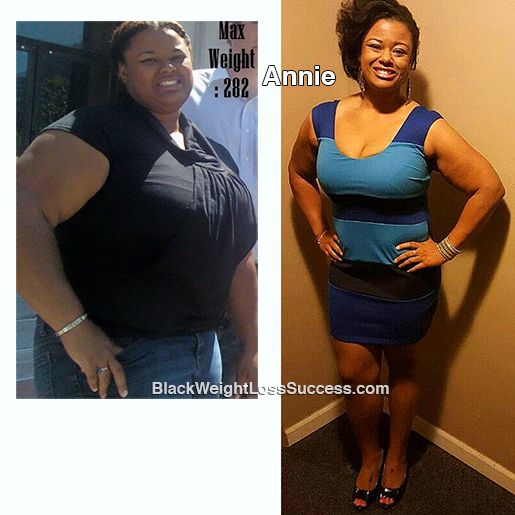 Every year, I made a resolution to “get fit”; but the resolve was gone by Martin Luther King Jr.’s birthday. I wasn’t a lazy person; I’ve always been active in sports. And, I didn’t lack general motivation. My determination propelled my accomplishment and leadership; academically, personally, and professionally. However, I could never apply my doggedness to a sustainable weight loss plan.

I decided to get to the root of the issue and my search led to a painful point in my past. I was sexually assaulted in my early teens. I mistakenly believed the lie that it was my fault. At the time, I was in great physical shape and believed that my appearance invited the attacks. I felt that the only way to be safe was to destroy my physical body. So, I ate, and I ate a lot. I hoped that if I became what I perceived to be unattractive that I would no longer be a victim. I gained almost 70 pounds in a single school year. Holding on to that secret and my rapid weight gain led me into a depression from which I would not emerge from for over a decade. Eventually, I “moved on” but had established poor habits and used eating as a coping mechanism. These detrimental behaviors were so ingrained that I was never able to lose weight, which was the last remnant of that painful past.

In time, I accepted my weight and owned my new identity, becoming the archetypal “fat, sassy, best friend”. People “comforted” me, saying, “Girl, you still cute.” and “You’re not fat; you’re just thick, curvy…”, or any substitute for obese. I was cute, but I was also unhealthy. I had a serious problem and people’s attempts not to make me “feel bad” did not treat it seriously. I had sleep apnea, severe back pain, high blood pressure, joint damage, and was winded doing basic activities. I barely fit in roller coasters and airplane seats. I broke a chair at my best friend’s surprise party. That was neither cute nor sassy.

In September 2011, I started seeing a therapist and began repairing my damaged self-perception. After several months, it was time to sculpt a new body to match my new attitude. I joined a gym, went regularly, but never pushed myself. Then, I got a personal trainer. My trainer supported me emotionally and pushed me to do more than I had the day before. My trainer’s caring approach was exactly what I needed to stay on track and cultivate new skills and habits that led to sustained weight loss.

Initially, to jump start the process, I cut out most carbs, especially dessert. I did Weight Watchers for the first 6 months until I felt confident enough to hold myself accountable to just calorie counting. I gradually added things back into my diet, taking a “nothing is off limits” approach where anything can be eaten if it’s planned for and accounted for in my calorie goals.

In the beginning, I tried to stick to 1200 calories a day but its incredibly restrictive and can’t be maintained over time. Now, I stick somewhere between 1350-1450 for 5 days a week (so I basically get 2 cheat days. Even then, I still eat way less than I used to). Avoiding emotional eating is my main focus diet wise. I don’t have any specific foods or diets that I swear by. Just the motto (that I read somewhere): If hunger is not the problem, then food is not the answer.

I worked with my personal trainer 2 days a week (the most instrumental part of my weight loss!) doing weights and boot camp type classes. On my own, I would “wog” (walk/jog) 5 days a week. As I got stronger and capable of more, I enjoyed boxing classes, high intensity interval training and weight lifting. Now, I workout 4-5 days a week. Also, I just made the team for the Women’s professional team here in St. Louis, so I’ll now have football practice to add to my regimen.

At my peak, I was 282 pounds. I lost 97 pounds and kept it off for almost 3 years. I am 5’5″ and a half (us short girls always have to add the half) and I’m 33 years old. I have not only lost weight but also the mental and emotional chains that held me captive. I share this deeply personal story in the hope that someone in a similar position will read it. Someone for whom their struggles with weight are not related to laziness or lack of motivation, but rather an unresolved emotional wound that has yet to heal. To this person, I would say that it is worth the hard mental, emotional, and yes, physical work to reach a path of strength and freedom that I had never imagined. 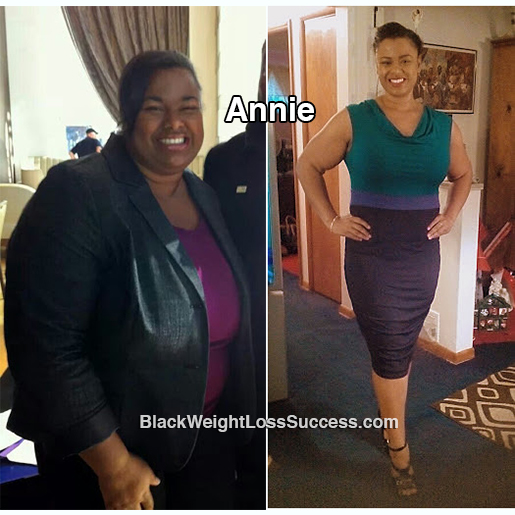