You are here: Home / Before and After Photos / Christina lost 42 pounds

Let’s show some BWLW love to Christina.  She lost 42 pounds with Weight Watchers, changing her eating habits and exercising.  Here is what she shared with us: 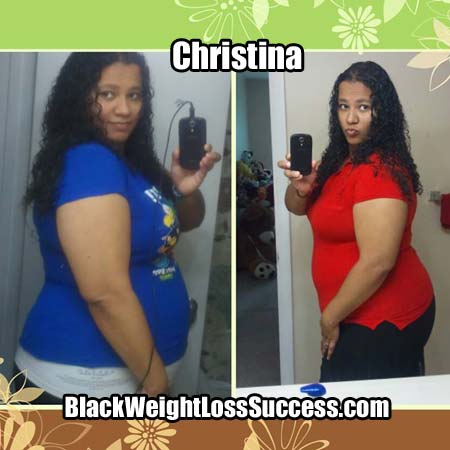 “Hi, I just wanted to share a weight loss story. Back in March of 2012 I found out I was pregnant. I gained 65 pounds with the pregnancy and my baby boy was born December 5, 2012.  I reached my highest weight in April 2013. I was at 303 pounds. Since then, I have gotten down to 261 pounds. I’m not done yet, but I’m excited that I have lost 42 lbs.  It has been a struggle, but I’m excited. I have about 20 or so pounds to go but I know now what my faults are and I’m working on changing those.

I’ve done Weight Watchers, but mostly I’ve changed my eating habits and exercised like crazy. Instead of reaching for chips and cookies, I replaced them with almonds and yogurts (not all the time, but enough to make a difference). I also started eating lighter at dinner instead of heavy meals. I also found out when I was eating right and my weight was stalling, I would have a dr. pepper a few times a week. Once I stopped drinking soda for a week I dropped pounds. For exercise, I did Zumba on Xbox Kinetic, walking videos by Leslie Sansone and a variety of videos on Comcast on Demand. Also, I started exercising for an hour to an hour and a half some days.  I still have some work to do but at 42 lbs down I’m excited. This page has helped me a whole lot. Thank you!” – Christina