You are here: Home / Before and After Photos / Lesa lost 42 pounds 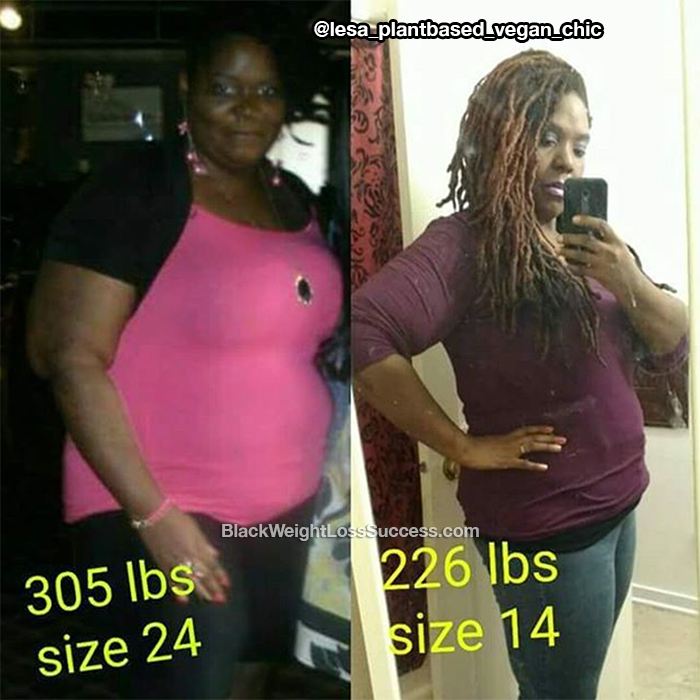 I’ve been eating a plant based diet for now 8 months. As I mentioned in my story, I weighed 305 pounds after having my 3rd child. With research and determination I gave up all meat and meat based products. This not only helped me to lose weight, but today my blood pressure is normal and I no longer need medicine to help control it.

On this journey, I have been so motivated by how far I’ve come that my progress in and of itself kept me pushing further. Plant based had become my way of eating. I’m sticking within a plant based food pyramid, along with low sugar and low carbs.

Now, I actually love exercising. From doing HIIT workouts to running, weight training to pilates and so much more. I workout 5 to 6 days a week sometime twice a day. I’m running, walking or doing HIIT workouts in my bedroom or living room on those days I can’t get to the gym. I do strength training as well. I also challenge myself. For example, I may do 300 jumping jacks, 250 crunches or 200 squats a day, maybe more.

I’ve always try to encourage people who want to eat a plant based diet and let them know there are other choices besides eating meat. When people contact me with questions on social media, I try to give them other choices. Many of them say they can’t give up cheese or yogurt. What most people don’t understand is that there are non-dairy choices for those things. Just eat them in moderation as you would any other food.

I look forward in starting a Facebook group for people who are looking to try a 3, 7 or 14 day transitional plant based diet. I look forward in sharing all my knowledge, from recipes to reading labels to workout plans that I follow.

June 2016 – Lesa has released 42 pounds since February. After her most recent pregnancy, she realized that her weight was over 300 pounds. She not only wanted to lose the pounds, but also wanted to improve her health in light of some major health issues and depression. She found success with plant based eating and lots of exercise. Check out her journey. 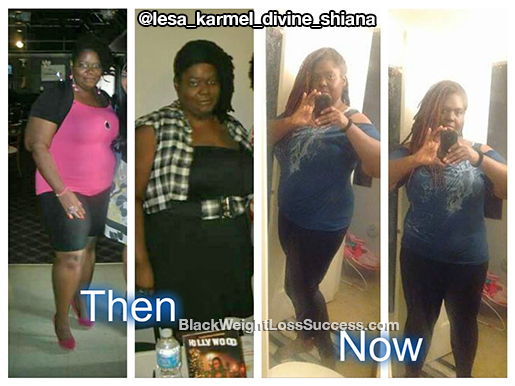 When I was pregnant with my last daughter, I knew that once she was born I’d have to work towards getting healthy and losing weight. I’ve suffer from very high blood pressure since I was a teenager. It became worse with every pregnancy. Low iron also caused me to take pills daily. One year ago, I had to get my gallbladder removed due to gallstones. Today, I know that poor eating habits were the reason.

I’ve tried to lose weight plenty times before. From counting calories, to barely eating to low carb/high protein. I’ve lost weight, gave up and gained it all back. You name, it I’ve tried it. I even thought about having weight lost surgery, but I knew I could lose weight without that.

The real problem was my eating and sometimes a lack of eating. I was also dealing with a lack of exercise and movement. I used depression as my reason to not workout.

While I was pregnant, I saw information online about eating a plant based diet. I saw before and after pictures from people who embraced this way of eating and thought “Wow”. However, after doing my research, I decided that I can’t go without eating meat, cheese, tuna and eggs, which were a big part of my eating routine.

After my last daughter was born at the beginning of February, my weight was over 300 pounds. That was the second time I’d hit the 300 mark and I cried about it. That’s when I went back to researching about going plant based and learning the do’s and don’ts of it. I won’t lie, it started off with me wanting to get healthy vs. caring for the animals. The more I researched the more I learned that all the animal by products I’d been putting in my body were all toxic.

With a newborn and two pre-teens, I knew I had to get my eating habits under control to be a good example. My depression had also gotten worst. So, I tossed in the towel and on February 23rd, 2016, I went cold turkey. I stopped eating all meat, seafood and anything that was processed with animal products. I started sticking to a plant based, vegan lifestyle by following the plant based food pyramid [example]. I slowly got into working out in March. The scale had already started moving, but I knew I had to put my body in motion to keep it moving along.

I became happier and less depressed. I started cooking food for my family that we would never have thought of eating if we were still consuming meat. As I continued to eat a plant based, wholesome diet along with exercising, I begin to notice my weight was dropping and my workouts were improving.

I’m amazed to see that from February this year to now I’ve lost a total of 42 pounds and 24 inches all over my body. I’m 5’8″ tall. I started out at 305 pounds and I weigh 263 pounds now. My BMI went from 46.4 to 40.3. I have so much more weight to lose… I know that, but I am blessed to have make a lot of changes. I’ve endured in this short amount of time. I can hang with the “big kids” now. I jump rope, chase after them, walk the trails and even beat them in a race. Most important, my blood pressure is now normal and my iron level is great. My depression has also improved to the point where I don’t need pills anymore.

I look forward in continuing my journey. I will continue to research my new lifestyle and get my family involved in a wholesome, plant based lifestyle.