You are here: Home / Before and After Photos / Chernika lost 102 pounds

Weight Loss Story of the Day: Chernika lost 102 pounds. She shared with us how she was able to deal with the loss of a child, 2 additional pregnancies and the resulting weight gain.  By eating healthy food, exercising regularly and never giving up, she has transformed her body.  Here is what she shared with us… 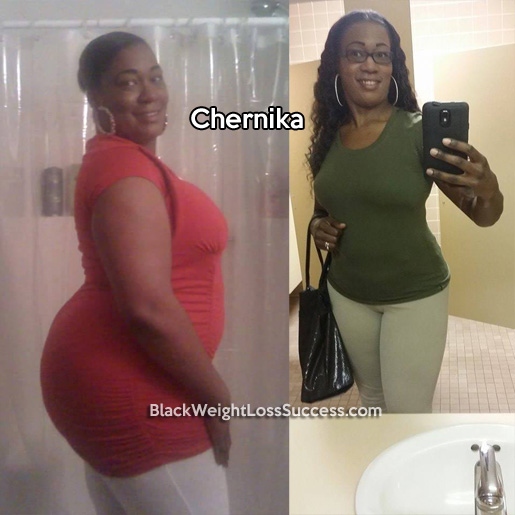 My name is Chernika and I am 34 years young. I began my weight loss journey 3 years ago. I was walking in the mall with my mother and I looked at myself in the mirror. I saw a very unhealthy and overweight ME. I was devastated and asked my mom how she let me get like that. She replied, “You are the one who ate all that food.” That night I went home and cried.

I already had two boys, ages 10 and 7 and my husband told me he loved me no matter how big I was, but he wanted a son since we were newly married. So, we became pregnant and we were so happy, but God had other plans. We left the hospital with no baby (I had a miscarriage). A few months after that started trying to lose weight on my own. At this point, I weighed 290 pounds. I was taking herbalife and joined the gym with my husband trying to be as active as I could and eat less. Then, I got pregnant again and I had my baby boy in November of 2012, but I was still heavy.

I lost weight after my pregnancy and the doctors told me that I was obese at 220 pounds. I became more motivated to be healthy, started going to the gym, cut out sodas, ate less fried foods and I got down to 210 pounds.  That’s when I found out my I was pregnant again. I was devastated because my husband’s vasectomy didn’t work and I had worked so hard to lose the weight. Now, I knew I was gonna gain it all back.

I continued to use herbalife while I was pregnant, along with my regular eating. I ate whatever I wanted because I was so upset that I was gaining weight. I got up to around 260 pounds and had another baby boy in June 2014. After I gave birth, I was at 220 pounds. I gave myself four weeks to get to 210 pounds. When I went back to the doctor 4 weeks later, I had reached my goal but I was still unhappy about my weight. So I started running and walking in my neighborhood and going to the gym.  I now do Zumba twice a week and run the walking trail at Polk State College. I can now complete three miles in about 30 minutes. I do leg lifts, crunches, and squats with weights as well.

Eating Habits: My eating habits consist of replacing 2 meals a day with an meal replacement shake, and having a main, balanced, low carb meal with protein and veggies. I have been off sodas for about 4 years and drink a gallon of water daily. I also eat healthy snacks on between meals, such as granola bars, fruit, and yogurt. I used to eat McDonald’s often (2 double cheeseburgers, Mc Chicken, and 3 chocolate chip cookies and a sweet tea to wash it down). That’s no longer part of my eating routine, along with fried foods.

I started at 290 pounds and now weigh 188 pounds (height: 5’8″). My advice to others who want to lose weight is to start working out and start eating right… and never stop. I’m currently a coach helping anyone who wants my help. God is good and I feel so good. 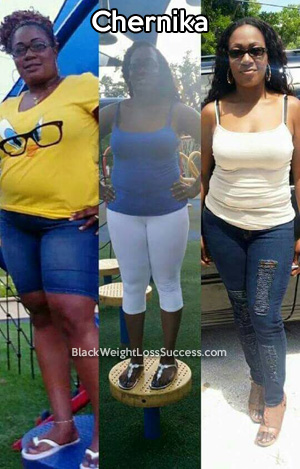