You are here: Home / Before and After Photos / Felice lost 60 pounds

Today’s featured weight loss success story: Felice lost 60 pounds after dealing with divorce, finding new love and having her first child.  I think her story is one that a lot of ladies will relate to.  Here is what she shared with us:

My name is Felice and my journey started in 2007. To make a long story short, I was trapped inside a marriage surrounded in jealousy and gaining the weight was my way of warding off some of that jealousy and making it better. So, 5 years into the marriage and I was no closer to any happiness than when I started out. I looked into the mirror at the woman who could go to a mall and shop in any more than 3 stores because my back hurt.  A woman who ordered all take-out thru the drive-thru and played like the 2nd meal was for someone else when in fact it was for me. I didn’t like the woman I had become. Where was the woman who smiled and laughed and loved life? I asked myself if I could go through another 5 years like the last 5 I had gone through. Answer…no.

I bought an elliptical with my Christmas bonus December of 2007. That helped a bit, but I fell off again. February of 2008, I joined a gym. I went 5 days a week without fail. I counted calories and ate 1200-1500 calories a day depending on if it was a gym day or not. I counted fat and sodium as well. It took me until July of 2008 to lose 67 pounds. I was 3 pounds away from the 300 pound mark. I wanted a new life, a new beginning, a new everything. The marriage was over as of Feb. of 2008 when I started working out.  I moved to a new state in July 2008. I lost those 67 pounds and must have kicked my fertility into high gear because November of 2008 – I got pregnant with my first child. My newly found relationship provided me with everything I didn’t get from my marriage and this time I knew my net and total worth. Now my son is almost 4 years old (born in August of 2009). I gained 40 plus of the weight back when I was pregnant and from “happy weight.”

In January of this year (2013) my department at my job decided to do a Fitness Challenge. Since January I have lost those 40 plus pounds again and I’m now almost 7 pounds within that original loss of 67 pounds. I’m going to surpass that and keep going so that I am under 200 pounds. The middle and right photos are my before pics and the one on the left is my now pic. I like to say…”I am not where I want to be, but I’m a long ways from where I’ve been.” Starting weight: 297 pounds, Current weight: 237 pounds, 1st Goal Weight: 199 pounds, Ultimate Goal Weight: 170-175 pounds, Height: 5”3 and ½ – I will definitely be doing an update come December of 2013 to let you all know how much more I have accomplished. BWLW has inspired me to reach for those goals. The women who share their story are inspirational so I wanted to be what they have inspired me to be. 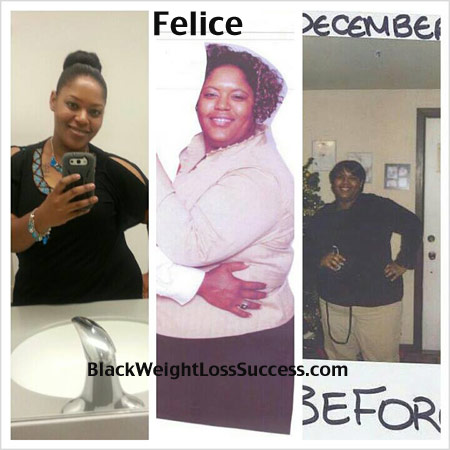