You are here: Home / Before and After Photos / Karen lost 60 pounds

Let’s show some love to Karen.  She lost 60 pounds after dealing with years of tremendous loss and sleep apnea. Here is what she shared about improving her health and losing the pounds: 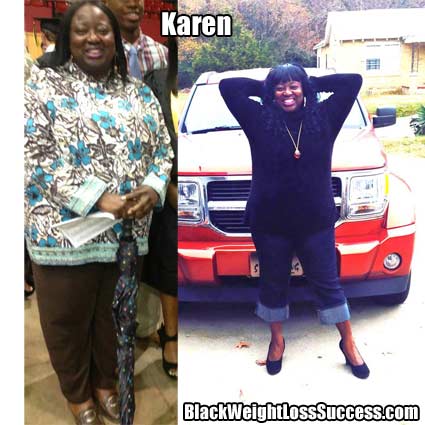 “Hello my name is Karen. I am 47 years old. My weight loss is a testament of God’s Grace and Mercy. My weight gain began my sophomore year in college and gradually progressed through the years. I had several storms in my life which caused me to be depressed. My brother was murdered at the age of 25, my childhood friend died soon after. My closest friend in college died of sleep apnea. My father died in 2000 and I lost my grandmother in 2010. My grandmother was with us until the age of 107. She was the rock of the family. I spent a lot of time with my grandmother. People say just think they had a long life or it was their time. Knowing all of this does not take the pain away. Even though we move forward their still in our hearts. I was in an emotional roller coaster relationship that was not healthy for me. I begin to stress eat and before I knew it I had gained quite a bit of weight.

Because of God’s Grace and Mercy I knew that changes needed to take place in my life and that meant I had to be willing to make those changes. I was diagnosed with high blood pressure and menopause in my early 40’s. I had gone to several doctors and no one could really diagnose what was wrong with me. I was frustrated. About four years ago I had gone to an urologist and he suggested that I go through a sleep study for sleep apnea. I was in denial. I said, no. I did not listen. However, I continued to have the same symptoms only by this time I was sleeping all day after coming home from work. My mother would send my sisters to my house to check on me. I would become so angry because they were interrupting my sleep. I now know that I could have slept on and not awakened. I was transferred on my job. This sent me back into a state of depression and I began to eat foods that made me feel good such as ice cream, cookies, and hamburgers from McDonalds, Taco Bell and Popeye’s. This hurt because I was happy where I was working I had been there for fifteen years. It was difficult for me to accept this change. I tried a new doctor and when I told him my symptoms he immediately suggested that I had sleep apnea and suggested that I be tested to validate the diagnoses. In February of this year I went through the sleep apnea clinic and was diagnosed in April. I knew that my weight was a contributing factor to my condition. All I could think about was that my friend had died from sleep apnea 25 years ago. He had given up and I had to fight for him in my mind.

I was overweight I needed to change my eating habits and lose weight. My doctor put me on a 1200 calorie diet. I lost 20 pounds in two months. I walked ten miles a day even though I was supposed to walk for 30 minutes. I wanted it! The third month I only lost 3 pounds. I decided to go on the HCG diet. It takes discipline as with any diet however, this was a weight loss tool that worked for me. It is a low calorie diet. It consists of fruits, vegetables, chicken, turkey, shrimp, and lean hamburger meat just to name a few. I have lost 60 pounds and I am continuing my weight loss journey. I want to lose another 40 pounds. I am no longer on blood pressure medication. It is because of God’s grace that I am still here. I know that I have a purpose to fulfill in this life’s journey. I awaken every morning reading two of Steve Maraboli’s inspirational quotes: “Renew, release, let go. Yesterday’s gone. There’s nothing you can do to bring it back. You can’t “should’ve” done something. You can only DO something. Renew yourself. Release that attachment. Today is a new day!”. And the other quote: “When you rise in the morning, think of what a precious privilege it is to be alive-to breathe, to think, to enjoy, to love –then make that day count!”. We are faced with many obstacles in life however; it is up to us to make that change. We are going to make mistakes in this life. We are human. Just start again and just do not give up. Remember God’s grace and mercy will carry one through. I am a living witness that he will help you on your journey. Don’t give up keep moving forward! It is through change that I have grown. I end with this quote Keep your dreams alive. Understand to achieve anything requires faith and belief in yourself, vision, hard work, determination, and dedication.

‘Remember all things are possible for those who believe.’
— Gail Devers”